Israel’s Defense Minister Avigdor Liberman warned Lebanon that Israelis would not be the only ones sitting in bomb shelters this time around if the Hezbollah terorist organization launches an attack at the Jewish State. He also cautioned international energy companies against leaping into any quick deals with Beirut before double-checking the status of the offshore blocks they were offered for exploration.

The defense minister issued the warning on Thursday, pointing out that Lebanon’s recent offshore oil and gas exploration tender includes Block 9 – which happens to belong to Israel.

Speaking to an international security conference hosted by the Institute for National Security Studies in Tel Aviv, the defense minister said “respectable firms are, to my mind, making a grave error, because this is contrary to all of the rules and all protocols in cases like this.”

Last month, Lebanon approved a bid for licensing rights to two of the five blocks from a consortium comprised of Total (France), Eni (Italy), and Novatek (Russia).

He also warned that if the Iranian-backed Hezbollah terrorist group launches an attack on Israel, Lebanon will “pay the full price” because at this point, Hezbollah and Lebanon are for all intents and purposes, “one and the same.”

This time, he said, “there won’t be pictures like the ones from the Second Lebanon War showing people on the beach in Beirut while Tel Aviv residents sat in bomb shelters. This won’t happen. If people in Tel Aviv are in bomb shelters, then they will also be in shelters in Beirut. This has to be clear to the other side,” he warned.

Israel, he said, is “determined and ready” to meet any challenge presented on the northern front, be it by Hezbollah, Lebanon and/or Syria.

“Israel will end any flare-up in the north as fast as possible with a decisive victory,” he said.

With regard to the JCPOA nuclear deal with Iran, Liberman agreed with Prime Minister Benjamin Netanyahu that it was, indeed, a “bad deal.”

Liberman said the deal “gave legitimacy to Iran’s nuclear program, its military plans, and its missile development. This deal put the Middle East into the nuclear weapons race,” he warned.

The defense minister underlined that Iran is a threat not only to Israel, but to the entire world. 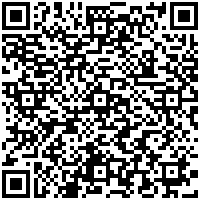