The state has declared for the first time the freezing of the planned demolition of an illegal Arab building in the Samoa village in south Mount Hebron, because of the Regulation Act, Reshet Bet radio reported Monday.

The act, designed to legalize structures built on illegally acquired private land in the liberated territories, is still being debated by the High Court of Justice, creating a state of limbo when on the one hand there is no legalizing procedure, and on the other hand buildings that sit on private land cannot be demolished – which is why the demolition of the illegal Arab structure has been frozen.


The December, 2018, Regulation Act was intended to provide a solution to several thousand Jewish homes built on private Arab land in Judea and Samaria – 3,455 housing units in all, according to the Civil Administration.

The law in effect seizes the right to use land which Israelis bought with government encouragement and in good faith —and which is inside a Jewish settlement—from its Arab owners. In return, the same Arabs will receive a generous compensation and/or alternative land of similar or better value.

Two petitions have been filed against the Regulation Act, and the High Court has yet to decide whether to annul the law.

The rightwing NGO Regavim has petitioned the High Court twice, demanding that the Arab structure in question be demolished, and the state responded that the building was at a “high priority for demolition.” But after it hadn’t been demolished for a few months, Regavim inquired with the Civil Administration.

In response, the state issued a statement saying the structure in question cannot be demolished at the moment, because the Regulation Act applies to it, and the High Court must first issue its ruling on its validity.

Regavim said in response that the Civil Administration’s claim that the building was protected under the Regulation Act is ignoring the language of the law, and constitutes a legal manipulation. Regavim added that is not the only case where the state has illogically suspended demolition of illegal Arab construction on account of the limbo state of the Regulation Act.

“This is a definite case of government by civil servants,” Regavim said. “The Civil Administration initially opposed the regulation act, and is now using it through their twisted interpretation, in a way that seems like a calculated attempt to avoid doing their job.”

“In the petitions we submitted to the High Court, the Civil Administration stated that the building would be demolished ‘with high priority,'” Regavim added, “But now the Administration claims that the structure is under the Regulation Act, openly ignoring the language of the same law.”

The building in south Mount Hebron whose demolition was frozen is one of about 10,000 illegal Arab buildings which the court debate on the Regulation Act is protecting. There are easily three times more Arab structures slated for demolition than Jewish structures. 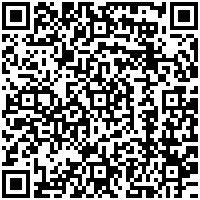