After the pressures and harsh criticism directed against Defense Minister and Yamina Chairman Naftali Bennett, on Tuesday evening, Bennett revoked the administrative detention warrant he had signed against Eliah Ben David, 19, a resident of Nof HaGalil, a city in northern Israel, population 41,169.

That’s a lot of Yamina voters.


Ben David was arrested a week ago Sunday by police and the Shin Bet on suspicion of throwing a stone from a passing vehicle in November 2019, which caused a severe head injury to a local Arab man. But despite a week-long interrogation without a lawyer present, agents of the Shin Bet Jewish Department failed to extract a confession from their suspect.

Arutz 7, the official news agency of the Bet El faction of Religious Zionism, chose—for some unknown reason not at all related to the political infighting in the quickly disintegrating post-NRP camp—to quote a security official who said that Ben David is “an extremely violent figure suspected of involvement in violent activity against Palestinians lately.”

But the members of the Hesder Yeshiva groups in Nof HaGalil, who are the friends and neighbors of this allegedly extremely violent figure (see photo) sent DM Bennett letters demanding the immediate removal of the decree issued against Ben David.

“We express a shock at the administrative detention of our community member and expect the defense minister not to collaborate with the attack on the boy,” one of the letters said, according to Hakol Hayehudi website.

MK Moti Yogev (Yamina) called for a re-examination of the use of such an extreme tool as administrative detention, and former MK Moshe Feiglin strongly criticized the Bennett move on his Facebook page.

A press statement issued by the Defense Minister Tuesday evening said that he had:

“ordered a re-examination of Eliah Ben David’s administrative detention order. After a thorough investigation, the Minister of Defense will today reduce the administrative detention order against Ben David to a restriction on entry into Judea and Samaria only, which will be signed by the Central Command’s commander, with additional administrative oversight. The manner of continued treatment of this case will be examined further on the basis of the data and facts presented to the Minister of Defense.”

“I am very closely familiar with the enormous efforts Bennett has invested over the last day and he deserves our utmost appreciation for it. There is still a lot to do until the total abolition of the discriminatory use of administrative proceedings against the settlers, but today we have taken a huge step in the right direction,” Smotrich said.

Of course, Bennett’s reduced restrictions on Ben David’s personal freedom is also rooted in the British mandatory government’s temporary measure of administrative detention, imposed without a shred of evidence against its victim. 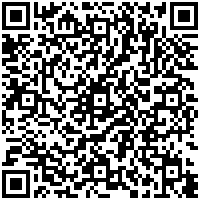