Remember when that virulently anti-Israel British politician, George Galloway…well there are so many ways to end that sentence, but this article refers to Galloway’s storming out of a debate at Oxford University because, as he so diplomatically announced before flouncing out of the room last February, “I don’t debate Israelis!”

Well Galloway was just had by a young Jew from Oxford who made his own dramatic exit after brandishing an Israeli flag, intoning: “I don’t debate racists!”

The topic for debate of the world famous Oxford University debating society, the Oxford Union, on February 21 was: “Israel Should Withdraw Immediately From the West Bank.”

After Galloway, a member of Parliament representing England’s far northern district of West Bradford, completed his presentation of the “pro” side of that question, the person chosen to represent the “anti” position, Oxford University student Eylon Aslan-Levy, rose to present.

As it happens, Aslan-Levy favors what he calls “an end to the ‘Occupation.'” But his problem was with the timing desired:  Immediately.  He began his talk by referring to the failure, prior to the 2005 Disengagement, of guaranteeing Israeli security as a condition of handing over territory. He barely got the following words out before Galloway’s dramatic exit:

This is the lesson from the disengagement from Gaza in 2005, which I supported – out of the same misguided faith that the cards were in Israel’s hands. Israel uprooted over 8,000 settlers and evacuated the military – but without a pledge from the Palestinians not to fire rockets at Israeli towns over the very border to which Israel had just withdrawn. We wanted peace: we got war. We mustn’t make the same mistake again. [emphasis added]

Aslan-Levy barely closed his mouth around those syllables, when Galloway ejaculated: “You said we! Are you Israeli?”

When Aslan-Levy acknowledged that he was indeed Israeli, Galloway flung his coat over his shoulder, and bellowed over it: “I’ve been misled, sorry. I don’t recognize Israel and I don’t debate with Israelis,” and then flounced out of the room, followed by his wife.

Fast-forward to Monday evening, October 14.  The setting is again Oxford University and the forum again is provided by the Oxford Union. This time there was no debate, it was just a talk by Galloway.

According to those who were present, Galloway spoke for over an hour, mainly maligning other British politicians, telling the student audience, “you couldn’t split the difference between the left [expletive implied] cheek and the right cheek.”

Former British Prime Minister Tony Blair was the prime recipient of Galloway’s verbal lacerations, but the usual far left bugaboos of  “occupation,” “colonialism” and “bankers” all score poorly in Galloway’s book and starred in his talk.  Taxation, on the other hand, is a dearly beloved concept.  When Galloway completed his talk, the floor was opened for questions.

After three questioners had their turn, Jonathan Hunter, an Oxford student, was selected as the fourth questioner. Hunter rose from the audience, gesticulating, and speaking in fluent Hebrew.

As Hunter approached the table behind which Galloway was sitting, the politician warned, “Don’t come any closer to me. What’s that up your jumper?” Galloway pointed at a bulge beneath Hunter’s sweater.  Hunter told The Jewish Press, “Galloway’s hands were shaking.”

With Galloway’s fears voiced, Hunter reached under his sweater and brandished what he had placed there, knowing he would not have been called on had it been publicly displayed before this moment:

“This is an Israeli flag, I’m an Israeli, Mr. Galloway.”

“You speak for fascists in Beirut [Hezbollah], you interviewed [former Iranian president] Ahmadinejad for Press TV,” but here Hunter was interrupted by Galloway who intoned, “you’re doing yourself a lot of harm here, son.”

Hunter again refused to be cowed, and responded to Galloway, “I think you did a lot of harm by not speaking to my friend Eylon [Aslan-Levy, referring to the February debate], and not having a constructive dialogue with him, and sir, I don’t have a question for you, as you can see, because I don’t debate with rascists. Thank you, sir.”

With that, Hunter opened the Israeli flag, hoisted it up over his head, holding it aloft and streaming behind him, he strode, stiff-necked, from the room.

George Galloway Fired from Own Radio Show over Anti-Semitic Tweet 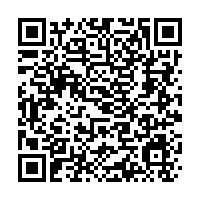