Hezbollah’s secretary-general Seyed Hassan Nasrallah on Sunday told the Al Mayadeen TV network that Saudi Arabia, together with the US and Israel, were behind the assassination of Iran’s top Revolutionary Guards commander Lieutenant General Qassem Soleimani, and the deputy commander of Iraq’s Popular Mobilization Units (PMU), Abu Mahdi al-Muhandis.

“The criminal assassination of General Soleimani was not only an American crime, but I believe that Israel and Saudi Arabia were culprits in this crime as well, even if their role was just to provoke Washington to commit it,” the Hezbollah leader announced.


Nasrallah warned that “everything that has been said so far about what Trump can do in his final days in office is still under analysis,” adding, ” Trump is currently an angry maniac and we must deal with the remainder of Trump’s term with caution and attention,” because “President Donald Trump could launch a military attack during the remaining days of his term.”

According to the Hezbollah leader, Saudi Arabia has been instigating a US policy of assassinations since the war on Yemen had begun. “The Americans agreed to a Saudi request to assassinate me, encouraging Israel to implement it,” he suggested, noting that “targeting Hezbollah leaders is a common American, Israeli, Saudi goal.”

In the interview, Nasrallah said that “the martyr Soleimani was a man of strategy and planning and at the same time a man of action and tactics,” noting that “recently, before his martyrdom, I was very concerned about his safety and warned him repeatedly.”

Nasrallah confessed he misses Soleimani a lot and feels that they were one person. According to him, “Soleimani developed a strong relationship with all the Palestinian resistance factions,” and there were “no red lines limiting the martyr Soleimani’s logistical support for the Palestinian factions,” including the delivery of Kornet missiles to the “resistance in Gaza,” which was Soleimani’s doing.

Asked about his message to Israeli Arabs, Nasrallah noted that in his opinion in a future war “the hearts and minds of the Palestinians within Israel will all be with us.” He said the Israeli Arabs are waiting for any opportunity that could change the equation in the area in their favor. “From what we glean from their positions, they are looking forward to the day when Palestine will once again stretch from the sea to the river,” he said. 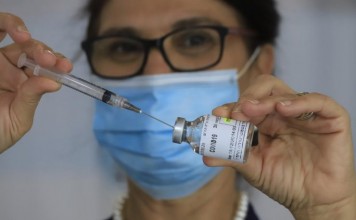 Why I Got Vaccinated