U.S. Special Representative for International Negotiations Jason Greenblatt spent Wednesday touring the Gaza border in a visit that was separate from that of United Nations Secretary-General Antonio Guterres, who also was in the area for part of the day.


Greenblatt visited the Kerem Shalom and Erez crossings, which he observed “shows how [Israel] is trying to help the people of Gaza under very challenging and trying circumstances.”

The envoy was also guided by IDF Major-General Yoav “Poli” Mordechai, Coordinator of Government Activities in the Territories (COGAT) through a Hamas-created terror tunnel, as was Guterres. “I know a tunnel like this was probably used to kidnap Oron Shaul, Hadar Goldin,” he commented, adding there are “several Israeli civilians who are also being held by Hamas.”

Mordechai pointed out that the walls of the tunnel they were in were built with slabs of concrete, a “dual use” building material which creates a dilemma for Israel which is censured by the international community for regulating its entry into the enclave, and which pays with the blood of its citizens if it does not.

“One kilometer [length] of tunnel costs something like $200,000,” said Mordechai. “With a tunnel, you can build a hospital in Gaza, but the first priority and last priority of Hamas is terror; only after that does it concern itself with the support of civilians in Gaza. So this is very dangerous, and they use this to kidnap Israelis from the IDF, and those living around Gaza,” he said. “In this dilemma, we’re trying to do our best — to support the people while remembering we have two soldiers inside Gaza as well as civilians. I think the message is that we have to be sure that Gaza is using Israel’s efforts for humanitarian projects, and not for terror projects.”

Greenblatt also visited a nearby Iron Dome Battery and met with residents of Kibbutz Nahal Oz, who expressed their encouragement and hope for the success of the Trump Administration’s effort to help broker a peace deal. He told them that he was “very encouraged” by what he heard from them.

“You live under very difficult and challenging circumstances, it’s very dangerous, you’re under threat of rocket attacks, terror tunnels, terrorism generally,” he pointed out. “Yet what you said is that you hope for, the same way you hope that your own community will grow, and thrive and prosper. You hope the same for the Gazans, and that you’re worried that they also have 1.8 million people or a large majority of them are living under non-Democratic rule — and hopefully that will change,” he added.

“We live here for the last 17 years, and we understand and we feel the pressure which is put on our neighbors in Gaza Strip,” said a spokesman for the group. “We wish to come back to the happy years of the 90s – just 15 or 20 years ago – where we worked together on joint projects in aspects of agriculture, economy, environmental issues, tourism, higher education — for the benefit of both sides of the frontier.

“We wish you and our friends overseas to overcome the big gap, the political gap that we have, and what we dream of, is of an open border, free entrance, walking visits, of implementing our vision of mutual relationship, of good friendship with us and the Gazans.

“We’re talking about people: Arabs and Israelis, Muslims and Jews. We came here to live here two or three generations ago, and we plan to stay here for the next years and generations. But we wish to do it together — shoulder to shoulder — with our neighbors . . . which I want to call friends,” he said sadly. 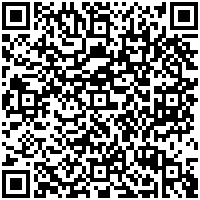