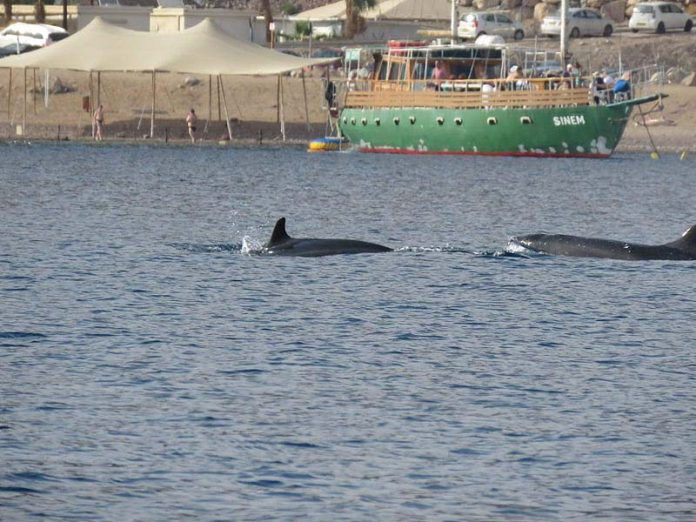 A supervisor and instructors from the Eilat training center of the marine unit of the Nature and Parks Authority on Tuesday ran into a pod of about ten false killer whales.

The false killer whales are actually dolphins, which received their name from their skull characteristics, which are similar to the real killer whale (Orcinus orca). They are highly sociable, known to form pods of up to 500 members, which may include other dolphin species, such as bottlenose dolphins (Tursiops truncatus). They form close bonds with other species, as well as partake in sexual interactions with them. Also, the false killer whale occasionally feeds on other dolphins, though it typically eats squid and fish (like all dolphins and whales, it’s a mammal).


The false killer whale is a deep-diving dolphin, with a maximum recorded depth of 3,043 ft. Its maximum speed is around 18 mph.

The pod that was observed off the Eilat coast eventually crossed the border to Egypt. The largest of the ten individuals was 18 feet long and weighed an estimated ton and a half.

The false killer whale has been known to approach and offer fish it has caught to humans diving or boating. However, it also takes fish off of hooks, which sometimes leads to entanglement or swallowing the hook.

It is the most adaptable dolphin species in captivity, being easily trained and highly sociable with other species, which is why it is kept in several public aquariums in Japan, the United States, the Netherlands, Hong Kong, and Australia.

The false killer whale regularly beaches itself, for reasons largely unknown, on coasts around the world, with the largest stranding consisting of 835 individuals on October 9, 1946 at Mar del Plata in Argentina.