On occasion, clichés emerge which offer the best description of reality, and one such case is Sunday’s report by the NY Times’ correspondents in the Palestinian Authority, David M. Halbfinger and Miriam Berger, headlined (I had to look twice to make sure I read it right): “For Palestinian Families, ‘No Light at the End of the Tunnel.’”

Yes, absolutely, I wanted to holler, for once the Times got it right: these Arab families will never, ever be redeemed by terror tunnels, nor by rockets, suicide bombing, random shooting, stabbing, car ramming – thank you, the newspaper of record, for finally realizing why these people have been suffering without a chance for ever attaining the life so freely enjoyed by their brothers and sisters on the other side of the green line: it’s because they are being led by violent, murderous, professional thugs who become rich at their expense. Remove the tunnel, this fortunate glitch of a headline suggests, and there’ll be light, a lot of it.


The article is a post-election report, describing how depressed the Arabs of Judea, Samaria and Gaza have been since Prime Minister Benjamin Netanyahu’s monumental victory on April 9, his own personal best – 35 or 36 Knesset seats – and the demise of the leftwing opposition in Israel, which is stuck at 55 seats compared to the right’s 65.

“The people in the West Bank who have taken up arms, gone to jail or spent their lives working, praying or waiting for self-determination are now asking whether all that time, effort and emotion were for naught,” the sad Halbfinger and Berger report says, noting that “in Hizma, a crowded village near Jerusalem almost completely ringed by Jewish settlements, Jahd Abu Helew, 42, has begun to contemplate what giving up on a state would mean for his five children.”

“‘The years before the PA came were better,’ he says of the Palestinian Authority, which has governed parts of the West Bank since 1995. Before that, residents were still under Israeli occupation but had more freedom of movement. He dismisses the authority as Israeli-owned, largely because of how much Palestinian security forces do, in his view, to aid Israeli control. Life is only getting worse, he said.”

And his mother, Najah, 61, “would settle for living under Israeli sovereignty with equal rights. At least it would be a ‘normal’ life, she said.”

Brothers Rameh and Rand Musmar, 31 and 35 respectively, who come from a family well connected to anti-Israeli terrorism, are disillusioned about the prospects of the 2-state solution. “Most of the people in my family, they’re seeing Oslo as dying, finished,” Rameh said. Rand said, “We should make peace. That’s it. We are lying to ourselves, and they are lying too. They are lying about the history, and we are lying about the reality. We’re always saying, ‘We’re strong, we’re still alive, we should fight till our last breath.’ No — this is wrong.”

Interestingly, there is one common denominator to the complaints one hears from these PA Arab residents and the Jewish settlers next door: both groups want to see the 52-year martial law lifted from Judea and Samaria. Clearly, local Arabs endure quite a bit more hardship at the hand of the IDF-run civil government, but their conditions are 100 percent the result of acts of terrorism committed by their own kin. They complain about the long wait and the occasional humiliation at the check posts – but those check posts are the natural response of the Army to the danger of terrorism. The settlers, on the other hand, are treated like second class Israelis simply because of their zip codes.

Two events are on the way which could ultimately remove the very idea of a Palestinian state next door to an Israeli one off the table.

From hints leaked lavishly by President Trump’s White House, the “deal of the century” will compensate local Arabs with billions of dollars in investments in their economic and civic well-being, for the fact that they will remain an autonomous canton, but not a state.

And during the last days of the 2019 elections, Netanyahu promised to bestow sovereignty on the Jewish settlements in Judea and Samaria. In reality, this won’t change much – the IDF civilian government already applies the majority of the Knesset’s latest legislation in Israeli settlements. It’s not even close to the way international media have interpreted this to mean the annexation of these territories. But symbolically it might as well mean annexation, as whole swaths of Israeli settlements would become one with the home country, erasing the 1949 armistice border, a.k.a. the green line.

Many times, the mainstream Western media are the last to understand major historic shifts even as they pass before their eyes. This time, though, the New York Times was on the money: For Palestinian Families, ‘No Light at the End of the Tunnel’ – but, possibly, a whole lot of light outside the tunnel. 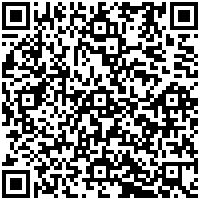