Overnight Thursday, Israel dismantled the infrastructure for the installation of smart cameras, or any cameras, really, at the entrances to the Temple Mount compound, in compliance with the list of demands submitted by the true owner of the site, the Jordanian Waqf. Thus Prime Minister Benjamin Netanyahu has exchanged a possible short-term lull in Arab rioting in Jerusalem and elsewhere for Israeli sovereignty on the Temple Mount.

Israeli police removed every last stitch of metal that constituted the crossings and bridges that were supposed to serve as a base for smart security cameras at a later stage. So, while experts were debating on various Israeli media outlets whether or not those smart gadgets could actually detect whether a given Arab had hate in his heart while preparing for the Friday prayer, Bibi took down the whole thing anyway.

The victorious Mufti of Jerusalem, Sheikh Mohammed Hussein, said Wednesday night that “against the background of the developments of the past few hours, all representatives of the Palestinian people have gathered in the political, religious and popular levels, and we will make the right and appropriate decisions.” He added that “in the meantime, prayers continue outside the mosque.”

Early Thursday morning, he announced that the faithful are now invited to walk though the liberated Lion’s Gate and pray inside the compound.

It was a night of outrageous celebration the likes of which the Arabs of the territories had not experienced maybe since the toppling of the twin towers. Arab media broadcast images of thousands of people celebrating at night in the streets of Jerusalem the removal of the camera infrastructure — and the affirmation of their deep belief that the Jews, like so many other colonial powers before them, are here only briefly, while they are here for eternity. They shot fireworks, danced and shouted cheers.

Oh, and just for added perspective, rumor has it that the Waqf insists on security checks for Jews entering the Temple Mount.

You have to love the smell of Tisha B’Av in the morning. 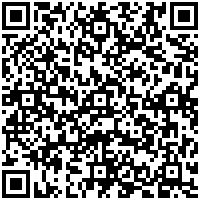