Some gifts just keep on giving. In this case, it’s the unfortunate statement by Israel’s new education minister, Rafi Peretz (Habayit Hayehudi), a newcomer to politics who has many enemies, apparently, who on Saturday night spoke in favor of conversion therapy for homosexuals. On Monday night, Xavier Bettel, the prime minister of Luxembourg, boycotted an official Israeli diplomatic event over the conversion thing.

Bettel, who is openly gay and married his life partner four years ago, is counted among Israel’s great friends on the continent, and conducted an official visit to Jerusalem last year. Nevertheless, he canceled his participation in a farewell dinner in honor of the Israeli ambassador to Brussels and Luxembourg Simona Frankel.


He explained his decision as a protest of the fact that one of the ministers in Israel’s government supports conversion treatments for LGBTQ youths and even claims that he had sent his own students to such treatments in the past.

The intimate dinner was attended by the heads of the Jewish community in Luxembourg, representatives of the Israeli government and Israel’s honorary consul in Luxembourg. Participants later described the entire event as being under a cloud of embarrassment, with the prime minister’s empty chair at the head of the table serving as a visible reminder of the humiliating boycott.

Back home, CEO of the LGBTQ Association in Israel, Ohad Hezki, implored Prime Minister Netanyahu to relieve Peretz of his office urgently in order to prevent the next embarrassment.

Also back home, a group of 33 educational counselors working in state religious schools issued a statement in support of Minister Peretz, saying they have sent troubled students to psychologists who help them deal with their sexual conflict voluntarily, through talk therapy which features none of the terrifying aspects of conversion therapy that have been cited in recent media coverage.

There are two problems with the statement: for one thing, it depicts normal psychological care which is perfectly sensible, but has nothing to do with conversion therapy; and for another, while psychological care for troubled teens with homosexual tendencies is appropriate, what angers the LGBTQ everywhere is the fact that the very proposal of conversion therapy depicts homosexuality as a perversion. Rafi Peretz and the nice folks from the state religious schools can proclaim their love for their students until a bluish hue takes over their faces – all the LGBTQ in the world are hearing is that they are perverts.

Right or wrong, this thing isn’t going away. The pressure on Netanyahu will keep mounting, especially since his own justice minister is openly gay. Bibi will do the math, Peretz will get the boot, and Habayit Hayehudi may lose a rookie leader without the instincts of a good politician.

Meanwhile, Hamas has been pushing gay people tied to chairs off rooftops, converting them into bloody puddles on the sidewalk. Somebody should tell Prime Minister Bettel. 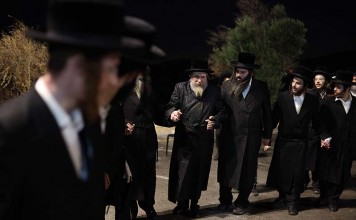