Eduard Dolinsky, director general of the Ukrainian Jewish Committee, a Kiev-based organization representing Ukrainian Jews, on Friday tweeted a disturbing video showing a clash between local Ukrainian residents of Uman and a group of Breslov Chassidim who had just arrived to celebrate Rosh Hashanah in their city.

“Residents of Uman joyfully welcome Jewish pilgrims,” Dolinsky tweeted sarcastically, noting that “the video was posted by the deputy of the Uman City Council from the Svoboda party Sergiy Alekseev.”
Advertisement


The All-Ukrainian Union or “Svoboda” party is a far-right, radical nationalist party. It is widely considered a fascist and anti-Semitic party.

In an earlier post on the same date, Dolinsky noted that last week marked the 79th anniversary of the murder of more than 23 thousand Jews in Kamenets-Podolsk. It was one of the first and largest Holocaust massacres carried out in the opening stages of war between Nazi Germany and the Soviet Union. The killings were conducted by the Police Battalion 320 of the Order Police along with Friedrich Jeckeln’s Einsatzgruppen, the Hungarian soldiers, and the Ukrainian Auxiliary Police. According to Nazi German reports, in two days a total of 23,600 Jews from the Kamianets-Podilskyi Ghetto were murdered, including 16,000 who had been expelled from Hungary. As the historians of the Holocaust point out, the massacre constituted a prelude to the Final Solution conceived by the Nazis at Wannsee several months later. Eyewitnesses reported that the perpetrators made no effort to hide their deeds from the local population.

Translation via Google: “On August 26-29, 1941, more than 23 thousand Jews were killed in Kamenets-Podolsk. Among the victims were thousands of mothers with young children. Before the murder, they were robbed and divided. This crime was committed by Nazis and local collaborators: police officers, government officials, members of OUN.” 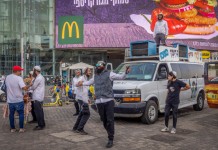 Where Am I: Dancing