Israel’s Prime Minister Yair Lapid on Monday praised the Hashomer Hachadash organization during a conference on Israel’s Governance and Personal Security organized by Israel Hayom, saying, “We need 30,000 more volunteers for Hashomer Hachadash.” His statement had a particular bite considering Benny Gantz, his defense minister and chief rival within the center-left camp to become prime minister, was in the audience. Gantz, alongside Labor Internal Security Minister Omr Barlev, are part of the reason Hashomer Hachadash is needed these days.

But first things first. On January 13, 2007, Shai Dromi, a lone farmer in the Negev, shot and killed an Arab burglar and injured another after they and two other thieves had broken into his farm. Dromi was arrested, which started a public debate over whether one is allowed to shoot burglars or trespassers in one’s home, and the debate ultimately led to a change in the penal code, known as the “Dromi Act,” establishing protection against criminal conviction shooting trespassers to chase them away. Needless to say, Dromi was acquitted of the charge of manslaughter that was pending against him.


In response to the traumatic event, a large group of volunteers gathered to protect Dromi and his property against his violent neighbors, which led to a significant drop in violent attacks in the area – something Wyatt Earp could have told you 150 years ago.

And that successful organizing effort eventually led the participants, including TV host Avri Gilad, and the Im Tirtzu group, to establish the Hashomer HaChadash, or The New Guard, a reference to Hashomer, or The Guard, a self-defense group that preceded the Hagana in Israel and fought the ancestors of today’s violent trespassers.

Haaretz described the group last May as the “largest Israeli militia,” and questioned its motives (התנועה הזאת הפכה למיליציה הגדולה בישראל. וזו היתה רק ההתחלה): “In the 15 years that have passed since the organization was founded, to help farmers against acts of harassment and looting, Hashomer HaChadash has grown into a veritable empire. It has 400 employees, thousands of volunteers, a youth movement with 24,000 members, four agricultural schools, 300 members doing National Service, one Nahal gar’in (nucleus group for IDF service and future agricultural settlement), and more. The organization’s annual budget is NIS 82 million ($24 million) and receives generous government support. In fact, out of all the organizations in Israel that operate educational programs, Hashomer HaChadash ranks first in its level of state support. And no less important, it has won the sympathy of politicians from all ends of the political spectrum.”

“In the beginning, police officials called the organization ‘a semi-underground body that acts like a militia,’ and feared that it might take the law into its own hands,” Haaretz reported. “Today it is already embedded in the flesh of the establishment, prepared and ready to take upon itself the preservation of the law.”

PM Lapid delivered the keynote address at the Governance and Personal Security, saying, “The state’s first responsibility is to protect its citizens, their homes, property, and fields. This is the only issue on which there will be no compromises. If the State of Israel wants to be a nation of laws, it needs tools with which to enforce the law.”

Lapid went on to say that “for years, law enforcement has been neglected, starved, and denied the tools it needed to ensure that Israel remains a safe country for its citizens,” and stressed that “the time has come for a policy change. We are going to place the personal security of Israeli citizens in the State of Israel at the top of our national priorities.”

Yoel Zilberman, chairman and founder of HaShomer HaChadash, greeted the audience at the conference saying: “There is a danger greater than Iran, and that’s our internal security. We see how racketeering is spreading like a pandemic, mass distribution of weapons, and a state of rampage on the roads. We are currently predicting a collapse of personal security. We are talking about the basic contract between the state and each citizen, that the state must start protecting him or her. But each citizen has the feeling that his or her personal security has been declining, and this is in contrast to the IDF’s defense of our borders. We want to see decision-makers at all levels reach the understanding that internal security is the most critical issue, regardless of which government is in power. This is the main issue by which the government will be measured and on which it must focus.” 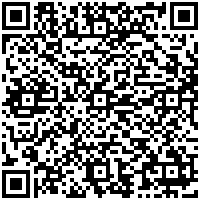