Russia’s defense ministry on Sunday claimed that “Syria destroyed two missiles fired by F-16 fighters of the Israeli Air Force,” suggesting, of course, that the successful downing was done by air defense units of the Russian military station in Syria.

The report, in ria.ru, cited Rear Admiral Vadim Kulit, deputy head of the Russian Center for the Reconciliation of Warring Parties (CPVS) in Syria, who claimed that the Syrian air defense systems destroyed two Israeli missiles fired at targets in Seydat Zeinab, Damascus.

On July 20, the same Rear Admiral Kulit claimed that seven out of eight guided missiles fired by Israeli fighter jets at an area southeast of Syria’s Aleppo were intercepted by the Pantsyr-S and Buk-M2 systems, manufactured by Russia.

“In a span from 23:39 to 23:51 on July 19, four F-16 fighter jets of the Israeli Air Force entered Syria’s airspace via the US-controlled al-Tanf zone and fired eight guided missiles at facilities southeast of the city of Aleppo,” Kulit said. According to him, “Seven missiles were downed by the Russian-made Pantsyr-S and Buk-M2 systems that were on combat duty. One missile damaged the building of a research center in the settlement of Safira in the Aleppo governorate.”

Now, Kulin claims that on Sunday night, two tactical F-16 fighters of the Israeli Air Force, without entering the airspace of the SAR, from the south-western direction, struck with two airborne guided missiles. Both missiles were destroyed with the use of the Russian-made Buk-M2E systems, which are in service with the Air Defense of the Armed Forces of the SAR.”

Brigadier General (Res.) Ram Shmueli, fighter pilot and head of the intelligence squadron before his retirement, who currently serves as chairman of the Hashomer Hahadash organization, told Channel 12 News: “These are Russian systems, their most advanced, and they are not picky about the veracity of their announcements, the main thing is to maintain a good image. It doesn’t help their sales of weapons around the world if the other side is penetrating their defense system. These announcements are driven only by economic and image needs.”

At the same time, he added: “Indeed, the Russians know how to do it (intercept incoming attacks – DI). In general, in war you look for solutions, sometimes you surprise the enemy and sometimes he surprises you.”

Shmueli noted that “presumably, from time to time they may succeed in downing this or that Israeli missile, and yet the reality is very far from the way the Russians and Syrians try to describe it since the targets are being destroyed. The Israeli Air Force is likely overcoming the Russian capability, both by technological means and by utilizing a large killing ratio of missiles, to ensure destruction.” 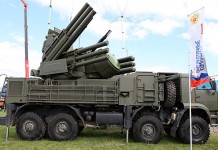