According to data issued Thursday morning by the IDF Military Intelligence Directorate, the country’s coefficient of infections continues to drop, standing at 0.85, following Wednesday’s 0.9. The rate of positive tests also dropped, and it now stands at 2.9%.

According to the latest data provided by the Health Ministry on Thursday morning, there were 2,802 new cases of Corona, based on 98,660 test results obtained on Wednesday.


As of Thursday morning, there are 645 patients in Israel whose condition is defined as serious, of whom 211 are on respirators. 5,955 have died since the outbreak of the pandemic.

According to these data, although Purim was celebrated in large crowds that disregarded the rules two weeks ago, it appears that the mass vaccination campaign made a huge difference compared with earlier, similar experiences such as parties and public demonstrations, and the rate of verified patients continues to decline steadily, as does the number of severely ill Corona patients.

However, the report noted that unvaccinated, recovered corona patients are still at risk of re-infection from the South African as well as the Brazilian variants. Therefore, even recovered patients are advised to get vaccinated as soon as possible.

According to data from the Ministry of Health’s Haredi desk, about 106,000 people from the Haredi sector received the first vaccine dose for Corona, 98% of them over the age of 50. 78% of the vaccinated Haredim are already entitled to the green tag privileges, meaning that a week has passed since their second vaccination.

Over the past 24 hours, 251 Haredi patients have been diagnosed, about 9% of the total morbidity according to Wednesday’s tests.

According to the traffic light system, the Haredi localities where the morbidity is highest in ascending order are Emanuel, Beitar Illit, Elad, Modi’in Illit, Rechasim, Bnei Brak, and Kiryat Ye’arim – the latter being red.

The Medical Director of Magen Israel, Dr. Orly Greenfeld, clarified in an interview on Reshet Bet Thursday morning that “it is not possible to open education facilities in red localities now because they have high morbidity. It could endanger anyone living there.”

Tomer Lotan, also of Magen Israel, expressed optimism in light of the data in an interview with Army radio Thursday, explaining that “the morbidity trends are all declining – which is the effect of vaccines. The exit plan from the last lockdown has worked in full, perhaps for the first time. This includes compliance with the indices and schedules—but we are still being tested.” 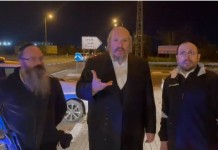