An Israeli speaker’s talk at a London college campus scheduled for this week was canceled on Wednesday. Why? Because, according to the cancelation notice sent by the student union, “there had been controversy” when he spoke at the campus two years prior, and the hosting organization failed to disclose that when the room was booked for the talk.

After cries of suppression of speech and vehement protests, the university stepped in and “un”canceled the talk. Hen Mazzig’s talk at University College, London, was reinstated. It would take place, as scheduled, on Thursday evening, Oct. 27.


The response by the anti-Israel mob was swift and the attack was vicious. A protest was called. Outside the room where Mazzig was scheduled to speak, livid demonstrators screamed for murder and the end of Israel. “Intifada, Intifada!” and “From the river to the sea, Palestine will be free!” They barred the entrance to the talk while pummeling the doors and windows, leering malevolently. Two thugs yanked open a window, hurling themselves into the room, launching several students inside into panic attacks. A woman inside kept repeating: “This is like the Warsaw Ghetto!”

The prelude and the coda of this minuet reveals volumes about the campus wars being waged against anything Israel these days.

Let’s start at the beginning: Hen (pronounced Khen, with the throat-scraping sound most non-Israelis find unpronounceable) Mazzig is a 27 year old Israeli who completed his army service four years ago. Since that time Mazzig has been speaking to audiences, especially on U.S. college campuses, about Israel. Mazzig is an educator who wants non-Israelis to understand his tiny country and his fellow countrymen. He is soft-spoken with a recognizable, but comprehensible, Israeli accent.

When Mazzig first started speaking to college students back in 2013, he was shocked by the vitriol directed against Israel by some American college students, professors and community members. Even Jewish ones.

In 2013, Mazzig wrote an epic cri de coeur, calling on American Jews to “Wake Up!” He was horrified to learn that Israel’s enemies are not just the hostile Arab nations surrounding his tiny country. “It is also here in America, where a battle must be waged against prejudice and lies. I implore American Jews to do more.”

This time around Mazzig is more sanguine about the atmosphere on U.S. campuses. He told the JewishPress.com that he is “happy that I was able to bring my voice into the conversation, to help raise  awareness.”

There is now ample funding to fight the scourge he urged Jewish leadership to recognize a few years back, the movement known as BDS, Mazzig told the JewisPress.com.  But the recognition of BDS as a symptom of the underlying illness is still too attenuated, including by Jewish leadership. “BDS is only a symptom of the disease which is the same old hatred – anti-Semitism.”

That hatred of Jews and, by extension the Jewish state, is what fuels BDS and other symptoms is made clear by the response to Mazzig in London last night.

The original effort to shut down Thursday night’s speech was based on a “controversy” surrounding a talk he gave in 2014 at Kings College, London. But that controversy was one created solely by anti-Israel protesters, not by Mazzig. In fact, the video and public statement posted by the protesters reveal that disrupting Mazzig’s talk and the walkout were planned in advance. The protest was not about anything Mazzig said — it was about the fact that any former IDF soldier was allowed to speak on campus at all.

Again at Thursday night’s event the protest was fueled simply by anti-Israel animus. Pro-Israel female students were assaulted on their way to the event. Many who sought entrance to the speech were barred by the protesters, those who gained admittance were prevented from leaving without a choreographed police escort.

But here’s the rub: while the haters did their best to prevent him from speaking, they did so without realizing that in his message and in his essence, Mazzig is the ultimate slayer of untruths about Israel.

For one thing, Mazzig’s family hails from Tunisia and Iraq – he is one of those “brown bodies” people love to claim Israel oppresses. For another thing, Mazzig was an openly gay commander in the Israeli army, where being gay raises no eyebrows, let alone scaffolds. Next on the list: Mazzig served in the COGAT unit. COGAT works with the Palestinian Authority to coordinate activities in order to improve the lives of the Arabs living in the territories.

During his IDF service Mazzig focused on protecting everyone, “coordinating humanitarian aid, and tending to the needs of civilians” living in the territories, Jewish and Arab, he explained. Mazzig and his unit worked feverishly “in a special operation conducted in the middle of the night” to unite an Arab Gazan orphan with an uncle in Ramallah, so that the boy “would not be left alone on the streets of the Gaza Strip.”

And the title of Mazzig’s speech at UCL, back in 2014? “The Hope for Peace: Promoting Peace While in Uniform.”

When the thugs were pounding on the doors and windows and shouting that Mazzig is a “murderer,” they were, albeit unknowingly, attempting to silence a speaker who understands Israel in ways they really must prevent the world from learning about. Otherwise, anyone who is not automatically a hater will realize that the throngs of illiberal thugs attempting to block free speech are the real roadblocks to peace.

Speaking from London following the event, Mazzig told the JewishPress.com:

I was standing in the room, trying to calm the Jewish students, while the mob outside was banging on the doors, on the windows, and calling for intifada. I knew this was not normal, nobody should have to endure this.

But neither Mazzig nor his talk’s sponsor, the media watchdog group CAMERA, were deterred. 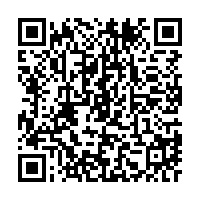