Some 200 Jews gathered Tuesday morning by the entrance to the Temple Mount compound, to commemorate Hallel Yaffa Ariel, 13, HY”D, who was murdered two weeks ago by an Arab terrorist in her bedroom in Kiryat Arba. Police then permitted some 50 to enter the Temple Mount, the largest group to ascend there this year—under heavy guard.

Following negotiation with the grieving family, Jerusalem police agreed to a more flexible visit, permitting the Jewish group a longer stay and not attempting to silence the uttering of blessings or saying Amen—as opposed to the 15-person limit in normal times and the complete prohibition of even the appearance of prayers or blessings.


The Muslims at the site cursed out the group and made repeated references to Allah, who is, they said, great.

One Jewish person was arrested earlier, according to Temple Mount activists, for the sin of closing his eyes and placing his hand over his eyes — an obvious criminal inclination to recite the Shema Israel.

Agriculture Minister Uri Ariel and MK Bezalel Smotrich of Habayit Hayehudi, and MKs Yehuda Glick and Oren Hazan (Likud) participated in the event at the foot of Temple Mount, but were not allowed t ascend, by order of the prime minister. The ceremony at the entrance to the holy site ended in dancing and singing.

The murdered child’s parents said they’d like to change the name of the gate from “Mugrabim Gate,” after the north-African Arab dwellers in the area before 1967, to “Hallel Gate,” after their daughter and after the Hallel prayer which accompanies every religious Jewish holiday rejoicing. 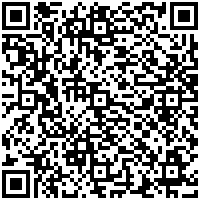