Arab terrorists fired from a passing vehicle at two Israeli cars near the village of Huwara in Samaria around 2:30 AM Friday.

One motorist was slightly injured by shrapnel and taken to Beilenson Hospital. His car was damaged, and at least nine shell casings were found, five of them near the car. The other vehicle that was shot at was driven by the Rosh Yeshiva of the Hesder Yeshiva in Tapuach. There were no casualties.

Samaria Council Head Yossi Dagan, who arrived at the scene with the council’s emergency teams, warned against the government’s policy in Judea and Samaria, which is directed by Defense Minister Benny Gantz:

“We are seeing a very serious resurgence of terrorist incidents, here, in the heart of Samaria, and in general, in the entire area between Shechem and Jenin. The Palestinian Authority pours more and more fuel on the fire and tries to create an intifada here. Let me say clearly, if the Israeli government does not allow the IDF to turn the tables here – it could cost blood. This policy that contains [rather than attack] the many armed men roaming the area, is the policy that brought about the attempted attack in Jaffa, which was avoided miraculously (see: Police Prevent Mega Terror Attack in Heart of Tel Aviv).

Dagan concluded: “We demand from the Israeli government to stop the condescension towards the Palestinian Authority and let the IDF move from defense to an all-out attack. That’s how we’ll prevent the next attack.”

On Thursday, Prime Minister Yair Lapid held an emergency security meeting in the Kirya in Tel Aviv to examine tools and immediate actions to stabilize the security situation in Judea and Samaria and stop the deterioration. The experts told Lapid essentially what Dagan stated a few hours later: the PA security apparatus is in place and quite capable of both reporting suspicious activities and quelling them, but the fish, as is often the case, stinks from the head: the PA brass in Ramallah is holding back its support and so allows the territory under its control to burn.

Israel has been pressuring PA Chairman Mahmoud Abbas to take action, but it’s doubtful at this point, with the sickly Abbas about to celebrate his 87th birthday in November, that he can impact security policy even if he wanted to.

Defense Minister Gantz, who has been engaged in an intense effort to boost Palestinian nationalism and met in person with Abbas at his home in Rehovot, on Thursday declared that Israel will increase its targeted activities against terrorism in Judea and Samaria and other arenas. “Our message to our enemies and the world is simple,” he proclaimed, “Wherever there is terrorism that’s not being dealt with – we will deal with it.” 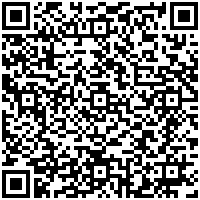