Yemenite Israeli singer Achinoam Nini is well-known in the old country for her extreme leftwing political views, earning her titles such as “Israel hater” for calling Israel “a fascist state” (because a leftwing high school teacher was reprimanded for persuading students not to enlist in the IDF). Her biggest complaint, however, is not about Israeli “fascism,” but about the fact that the BDS in foreign countries lumps her together with all the other Israeli acts, despite her leftist bona fides.

Couldn’t happen to a nicer gal? Goes without saying, except that the irony of her lament is escaping the talented but, alas, humorless Nini. On Sunday night she spoke at the Meretz party’s special conference marking the “50th anniversary of the occupation,” and told the audience that she was a victim of the boycott movement against Israel. This despite the obvious cognitive dissonance of her own boycotts against Jews living beyond the 1949 Armistice Green Line.


“I do a lot of cooperation with Palestinians, and I draw a lot of inspiration from what I do, but it’s not easy for me, and there’s a price to pay – the BDS are boycotting me,” Nini wailed.

The BDS activists “want to shut my mouth, and they are only helping the right who do enough of it – why should they try to silence me, are we not fighting on the same side?” Nini whined on, reminding her audience: “I do not appear in the territories, and I’ve announced that I would continue not to appear there until there’s a real deal.”

Except, of course, that what Nini considers a “real deal” would include the dismantling of Jewish settlements, which means she’s a no-show either way.

Nini shared that she had met Chairman Mahmoud Abbas and that she was “sure that he is a partner for peace,” and noted, “I can’t say the same thing about the prime minister or the current government in Israel.”

And, in conclusion, Nini once more related her suffering at the hand of “right-wingers who deliberately hurt people like me,” repeating: “But I feel that people from my side do not give me the strong safety net we all need to push them back into their holes.”

Now, there’s a lovely image for you, albeit the product of a puzzling, mixed metaphor: how does one push “them” into their holes using a safety net? 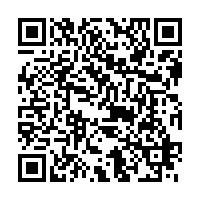