The State of Israel has carved on its banner the principle of freedom of expression. This is an important and necessary principle in a democratic state. At the same time, in recent days we have identified a severe increase in the violent and inciting discourse, with an emphasis on what’s taking place on the social networks.

It is a discourse that includes serious utterances, using language and terms of incitement, and even calls for violence and physical harm.

As the head of an organization dedicated to maintaining state security and the order of the democratic regime and its institutions, I call and warn that this discourse may be interpreted among certain groups or individuals as allowing violent and illegal activity that may, God forbid, even lead to harm to life.

Along with the responsibility placed on the shoulders of the Shin Bet, together with the other law enforcement agencies, public elected officials from all corners of the political spectrum, opinion influencers, religious leaders, educators, and all citizens of Israel also have a heavy responsibility these days. It is our duty to come out with a clear and decisive call for an immediate cessation of the inciting and violent discourse. The responsibility for calming the spirits and restraining the discourse rests on all of our shoulders.

Yamina chairman Naftali Bennett and his political partner Ayelet Shaked have received death threats since they announced they’re joining the Yesh Atid chairman Yair Lapid’s coalition government. The Department of Personal Security in the Shin Bet took over securing Bennett on Thursday, and the level of threats against both leaders rose to one level below the top, five out of six. It was further reported that the police were instructed to take all necessary measures to contain protests near Bennett’s and Shaked’s homes, which have been organized in recent days by Likud and Religious Zionism. In addition, on the instructions of the Knesset officer, the Yamina chairman now travels in an armored vehicle.


Defense Minister Benny Gantz expressed support for the Shin Bet chief’s remarks, tweeting: “We don’t seem to have learned the necessary lessons from past events. Those who try to deny the legitimacy of basic democratic moves and ignite the fire of incitement also bear responsibility. And I call on everyone to refrain from any violence.”

Gantz was obviously referring to the 1995 assassination of the late prime minister Yitzhak Rabin against the background of the bloody outcome of his Oslo Accords with the terrorist PLO organization.

So far, the powers that be appear to be marking the right as the source for this lethal incitement, with few in the country being concerned about the hate that’s being spewed on Arab social networks. Nor the hate that has been spewed against Netanyahu for the past year.

In fact, Argaman’s entire pitch may have been a prologue to the repression of a right-wing march of protest and defiance against the emerging right-center-left-Arab government. This parade could become an explosive show of rejection of Naftali Bennett’s political choice, a rejection he may not survive.

As you may have heard, a second Flags Parade that’s been announced by the Religious Zionist party, the Binyamin and Gush Etzion regional councils, the Bnei Akiva and Ariel youth movements, and Im Tirtzu for next Thursday, has become the focus of numerous attacks by the left in Israel.

The impetus for the second parade followed the last-minute change in the route of the original one on Jerusalem Liberation Day, last May 10.

Back then, in deference to Ramadan and to Arab riots that exploded in Jerusalem and the rest of the mixed cities in Israel, police diverted the marchers from the Muslim Quarter. This time, the parade is expected to resume its traditional course – unless police once again do the deference thing.

The Joint Arab List sent an “utterly urgent” letter on Saturday to Homeland Security Minister Amir Ohana and Police Commissioner Kobi Shabtai, under the headline, “Re: horrific danger of incineration, the writing is on the wall.” The five Arabs and one Jewish MKs accused the organizers of knowingly trying to ignite the country’s political life as a way of preventing the establishment of a new government.

Meretz chairman Nitzan Horowitz also blamed the prime minister and chairman of Religious Zionism on Twitter: “If Netanyahu and Smotrich re-ignite Jerusalem next week, there will be no more even the shadow of a doubt as to their motive and purpose. Netanyahu has lost it and is proving to be a real danger to the security of Israeli citizens. This makes the formation of a change government that much more urgent. We won’t let them burn down the country on their way out of Balfour (the address of the PM’s official residence – DI).”

Shouldn’t that last paragraph sound like incitement to the Shin Bet?

Of course, one surefire way to prevent the “ignition of Jerusalem” because Jewish marchers with national flags go in the street is for police to prevent violent Arabs from storming the parade’s path. Why only last week Jerusalem police picked up a slew of religious Jews they suspected of being a threat to the gay pride parade (whether or not they were even heading to the parade), and guess what – not one LGBTQ was harmed. So they’re capable of doing it, they just need to wanna’.

I for one am not convinced that the reasons behind the second flag parade are pure as the driven snow, but how many rallies would pass the driven-snow purity test? Recently Israel has experienced thuggish and sniper-accurate assaults by major social networks such as Twitter, Facebook, and WhatsApp on right-wing activists. On Friday, Yedidya Meir, a very popular rightwing journalist has his weekly column blocked by Facebook.

But as despicable as they are, and until the government finally decides to step in and regulate them, at least the argument can be made that being independent corporations, they have the right to ban whomever they wish. Israel Police, on the other hand, is not a private enterprise and its concern should be not how to ban Israelis from carrying out their lawful political demonstrations, but on how to protect them. 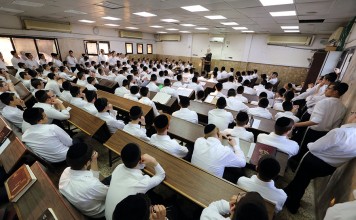