On Monday, thirteen years after former Adass Israel school principal Malka Leifer from Melbourne, who is accused of committing dozens of sexual offenses against minors, fled from Australia to Israel, she was extradited to Australian authorities by the Israel Prison Service in a covert operation led by Interpol. Her extradition was made possible after last month Israel’s Supreme Court rejected her appeal and recommended she be handed over to the Australian authorities.

In 2007, Dassi Erlich, a young Israeli Olah from Australia, sought counseling for recurrent nightmares and anxiety over her experiences at the Adass Israel high school, allegedly at the hands of principal Leifer. In February 2008, Erlich’s therapist contacted a psychologist in Melbourne who contacted a teacher she knew at the school. They dug up allegations of “inappropriate conduct” by Leifer, and the Australian teacher phoned Erlich and heard her claims about Leifer’s sexual abuse and concluded that “important boundaries had been crossed.”


The teacher then confronted Leifer who denied everything and told a meeting of the school board: “You have destroyed my reputation. I’m not going to stand for this.”

Victoria Police have since laid 74 charges against former principal Malka Leifer for her conduct between 2003 and 2008. At least eight victims came forward and an investigation was ongoing when Leifer, a dual Israeli-Australian citizen, fled under suspicious circumstances before a warrant had been issued, and remained in Israel since 2008, pending the resolution of her extradition case.

Israeli officials, most notably United Torah Judaism leader Yakov Litzman were criticized for enabling Leifer to avoid prosecution, which was described as “a farce” and “an embarrassment.” Leifer lived freely in the settlement of Emmanuel but was eventually arrested because of media attacks. But she continued to evade extradition, through more than 70 court hearings and appeals, with the collaboration of then Health Minister Litzman who enlisted his office’s psychiatrist to testify that Leifer was unfit to be extradited. In September 2020, the Jerusalem District Court ordered Leifer extradited to Australia, and on December 15, 2020, Israel’s Supreme Court rejected her final appeal.

In 2015, the Supreme Court of Victoria awarded more than $1 million Australian against Leifer’s school, as well as $150,000 exemplary damages against Leifer. Australian police is also investigating some members of the Adass Israel community for helping Leifer escape from Australia. Israeli police have also investigated several officials, including Litzman, for allegedly interfering in Leifer’s extradition.

Supreme Court Justice Anat Baron wrote: “As is well known, the extradition agreements signed by the State of Israel—the purpose of which is international cooperation for the eradication of crime—must be respected. And anyone who seeks to escape from the law must know that they will not find a city of refuge in Israel. Finally and given all the foregoing, I will recommend to my colleagues to dismiss the appeal and uphold the judgment of the District Court which declared the appellant extraditable to Australia.”

The Magen organization, which supported the former principal’s victims, worked to expose Leifer’s suitability to stand trial and pushed for launching an investigation to prove Leifer was lying when she claimed she was exempt from prosecution, announced: “We welcome the extradition of Malka Leifer to Australia. It took over 70 hearings until the extradition was decided, but finally, this moment has arrived. We stand by the victims and strengthen their hands ahead of the beginning of the next phase of the journey, before the Australian justice system. As an organization and a community, we will continue to fight on behalf of the victims, and also fight with all our might that Israel will cease to be a state of refuge for sex offenders and that such an extradition saga will not be repeated.” 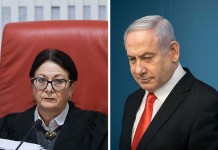