Remember General John Allen, a four-star US general whose vision for Judea and Samaria included a Palestinian state with full sovereignty inside the 1967 borders, with its capital in east Jerusalem, and with minor modifications for the settlement bloc?

If you were wondering why would a US four-star general be so remarkably hostile to Israel, inviting it, essentially, to commit national suicide, the answer was at least partially provided by the FBI this week: he is suspected of making false statements and withholding “incriminating” documents about his role in an illegal foreign lobbying campaign on behalf of Qatar.

According to Politico, FBI agent Babak Adib suggested in a search warrant application regarding Allen’s data, that the general is suspected of violating the Foreign Agents Registration Act: “There is substantial evidence that these FARA violations were willful.”

The FBI suspects that while lobbying U.S. officials, Allen failed to disclose “that he was simultaneously pursuing multimillion-dollar business deals with the government of Qatar.”

After five years, we finally understand why Gen. Allen was so sinister in his ignoring the fundamental truths of Israel’s relations with the PLO government in Ramallah, and why his plan was based on the complete acceptance of Palestinian demands for full sovereignty from the Jordan river to the 1949 armistice line, which meant no IDF soldiers anywhere in their state.

By the way, Gen. Allen’s response to Israel’s demand for defensible borders, which required an IDF presence in the Jordan Valley was to propose posting a US military contingency to replace the IDF in the Jordan Valley. He even suggested that an American force would provide Israel with “a degree of security equal or greater to that provided today by Israel’s deployment into the West Bank …” A promise whose realism was illustrated well during the final days of the US contingency in Afghanistan.

Now, if Allen is just another Obama administration anti-Zionist hack, what’s Benny Gantz’s excuse? Back in December 2020, then Israel’s Defense Minister and Alternate Prime Minister called Gen. Allen “my personal friend,” and told the Saudi paper Sharq Al-Awsat: “Jerusalem must remain united. But there will be room for a Palestinian capital. It is a very spacious city, full of holy places for all.”

Gantz was asked about the borders of the Palestinian state: “What about the limits? The Palestinians are asking for the 1967 borders with a land swap. On the other hand, President Trump’s plan talks about annexing 30 percent of the West Bank, from the side of the Jordan Valley.”

Gantz responded: “We need the Jordan Valley for security. But the issue of the area is not necessarily 30 percent, and this area can be greatly reduced. You know that we had opposed the annexation plan from the beginning, before the UAE demand was raised and before Netanyahu agreed to the freeze. We stood against the legalization of the outposts. We want the Palestinian entity to have an appropriate geographical extension that would make it viable for a comfortable life without obstacles and limits. What we are persistently asking for is security. We need real strategic checkpoints for security. Of course, it is possible to talk about a land swap, although I don’t see how and where. We say that the 1967 borders will not return. But there is always a possibility to find compromises. The important thing is to keep the path alive. And the Palestinian issue should not be left behind in the winds of the current peace.”

Allen has been placed on administrative leave as president of the Brookings Institution after The New York Times and The Associated Press revealed that federal prosecutors presented the court with records showing he had engaged in an illegal lobbying effort, lied to investigators about his role, and tried to withhold evidence requested by a federal subpoena.

Haman’s wife, Zeresh, told him millennia ago (Esther 6:13): “If Mordecai, before whom you have begun to fall, is of Jewish stock, you will not overcome him; you will fall before him to your ruin.” 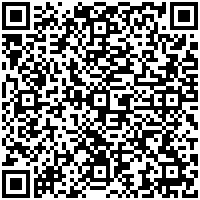