Nabil Shaath, an adviser to Palestinian Authority Chairman Mahmoud Abbas, said on Wednesday that the PA is ready to return to negotiations with Israel – provided the annexation is cancelled. By annexation he referred to the application of Israeli law in a portion of the Jewish settlements in Judea and Samaria, probably not including the Jordan Valley. The whole thing will likely amount to less than 15% of what used to be known as the West Bank.

Shaath said the renewed peace negotiations should be based on the UN resolutions and be mediated by the International Quartet and not the United States alone. The Middle East Quartet comprises the United Nations, the United States, the European Union, and Russia. So, in reality, it includes more than a hundred countries

In an interview with a Russian TV channel in Arabic, Shaath said that the PLO would not revoke its recognition of the state of Israel as long as the PA leadership is not convinced that all hope for a two-state solution is lost. He added that a military resistance against Israel is not at issue now, but urged instead quiet economic and international resistance.

With the arrival of the July 1, 2020 deadline set by Prime Minister Benjamin Netanyahu, after which he is free to apply Israeli sovereignty in Judea and Samaria (but not necessarily on this date), an Israeli security official told Reshet Bet radio that no unusual events are expected in the liberated territories. According to the source, the IDF and the security establishment are preparing for an escalation, but so far no reinforcements have been sent in, and the level of readiness has been raised.

According to the same security apparatus source, the political statements and the ongoing debate around the sovereignty plan are manifest in the field, as the PM’s declaration about the start of implementation on Wednesday has raised tensions on the Arab side on the political level as well as on the street.

But the Abu Ali Express report on Telegram suggested the Arabs in Gaza have lost interest in the annexation business and are focusing instead on a young woman named Fada A’avin who divorced her husband after he had taken a second wife, and to add insult to injury posted pictures on social media of her party to celebrate the divorce. All of Gaza is talking about it – no one cares about what the Jews are doing.

On Tuesday night, Arab sources reported that Hamas’ military arm conducted an experiment on launching long-range rockets, as a kind of warning message to Netanyahu. They shot those rockets into the sea, and their range was so long, some claim they were picked up by Greek radar.

In the meantime, an anti-annexation procession was held in Gaza on Wednesday, titled “March of Fury.” However, according to reports, the fury was very moderate and the procession, led by Yahya Sanwar, leader of Hamas in the Gaza Strip, did not go in the direction of the border fence but toward the sea.

According to a report from Gaza, Hamas reinforced its check points along the border with Israel and erected new checkpoints on the way to the border, to prevent protesters from reaching the perimeter fence. The last thing they want at the moment is an ugly confrontation with a country that has a good air force.

A protest rally is also expected in Ramallah this afternoon. That’s it. No one else in the Arab world even cares. 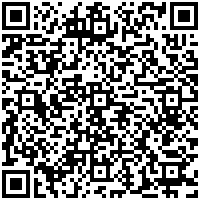