Following a Monday morning assessment of the situation in Jerusalem, Police Commissioner Yaakov Shabtai decided that in view of the sensitive situation, there would be no visits by Jews to the Temple Mount on Jerusalem Liberation Day.

It seems that everyone who spoke this week about the need to ban Jews from entering the Temple Mount, starting with UN Secretary-General António Guterres to Meretz MK Tamar Zandberg demanded that Israel protect the right to worship and in the name of the same right it must forbid the prayer of Jews at the most sacred place for Jews in the world.


Of course, the religious right sees this as a surrender to the wave of terror, the flames of which are fanned openly by Hamas. The terror group announced Sunday: “We are not just watching the events, but are generating and directing them.”

The man behind that announcement was senior Hamas leader Saleh al-Arouri, who runs from his shelter abroad the Hamas activities in Judea and Samaria. He incited the PA Arabs on Sunday night to injure soldiers and settlers.

In a demonstration in the heart of Ramallah, the Arabs called on their brothers in the Gaza Strip to join the battle for Jerusalem, and processions are planned on Monday evening at the centers of friction with the IDF in Judea and Samaria.

Therefore, many in Israel’s establishment have suggested that the decision to ban Jews from ascending the Temple Mount is wise, in light of the fact that entry into the Temple Mount by Jews would increase the escalation in Jerusalem, create a dangerous and violent point of friction right outside Al-Aqsa mosque, and would put the police at very high risk.

It is possible that in the future the Israeli police would prohibit the banks from taking measures to prevent robberies because it might upset the robbers and endanger the cops. After all, the ultimate goal of the police is to keep all the policemen safe.

By the way, according to Jerusalem Mayor Moshe Leon, the source of violence are not the Arab residents of eastern Jerusalem but the Israeli Arabs who flock to the holy city en masse from the north of the country, which is dominated by the northern faction of the Muslim Brotherhood.

United States National Security Adviser Jake Sullivan spoke by phone with his Israeli counterpart Meir Ben Shabbat and expressed Washington’s deep concerns about the situation in the holy city. A White House statement said Sullivan also stressed the United States’ serious concerns about the possibility of Arab squatters being evicted from their homes in the Sheikh Jarrah neighborhood. He encouraged the Israeli government to take appropriate measures to ensure calm during Jerusalem Day and promised that the administration would be involved in the coming days in efforts to maintain calm in Jerusalem.

Meanwhile, the Supreme Court decided to postpone the hearing that was supposed to take place on Monday on an appeal by the same Arab squatters about their eviction from Jewish-owned homes in the Shimon Hatzadik neighborhood in Sheikh Jarrah, Jerusalem.

In addition, the court imposed a delay in the execution of the eviction itself, after Attorney General Avichai Mandelblit asked for the postponement because he said he was considering joining the court process. “This procedure raises sensitivities in other respects,” Mandelblit wrote in his motion to dismiss the eviction. “Therefore, the state seeks to submit in the presence of one party the opinions of professionals and various policy factors.”

There you go. The cops will explain to the banks why the government supports the robbers. It’s all good, they’ll bring experts.

The White House also said that Sullivan and Ben Shabbat had condemned the launch of rockets and incendiary balloons from Gaza, and that’s very satisfying because imagine if the White House had also demanded that Israel stop harassing the peaceful balloonists of Gaza.

Meanwhile, thousands of policemen and border guards were deployed across Jerusalem Sunday night following the riots and violent disturbances in recent days, and in expectation of Monday’s Jerusalem Day celebrations.

The reinforcements were sent to the sensitive spots – the gates to the Old City through which Jews walk to the Western Wall, the support wall built by King Herod for the Temple Mount, where even in the days of that wicked king Jews were not forbidden to pray.

On Sunday evening, at the entrance to the Hebrew University, there was violent friction between Arab youths and Jewish students who were exiting the university gates. The students were attacked by the young Muslims with stones. Police were called to the scene and three of them were sprayed with pepper spray and lightly injured. The university administration instructed the students to stay inside the compound and lock its gates to keep them safe.

And so, by the way, freedom of study in the Israeli capital was also guaranteed.

With the end of Ramadan prayers on Sunday night, violent clashes began again on the Temple Mount. This was the third night in a row of clashes. According to police estimates, about 100,000 Muslim worshipers passed through the Temple Mount gates on Sunday. Police worked to disperse them in order to restore order at the site, repel the rioters and reduce the damage to the tens of thousands of worshipers who were present at and near the Temple Mount plaza.

The police are preparing, among other things, for the Flag Dance parade that will be held on Monday, and Jerusalem District Commander Superintendent Doron Turgeman decided that while Arabs are allowed to bring 100,000 Muslims to the Temple Mount, Jews will be allowed to include only 8 to 15 thousand in the procession of flags because more than that would surely upset the bank robbers.

The IDF takes into account that following the events in Jerusalem there may be a more significant escalation in Judea and Samaria, so it decided not to take chances. On Sunday, Chief of Staff Aviv Kochavi decided to send in three more battalions, to bolster the defense on the seam-line between Israel and the Palestinian Authority.

Monday’s peak in the tensions in Jerusalem is expected to be between 4:00 and 9:00 PM in the mass flags parade. Given the charged situation, security and political elements have recommended canceling the traditional parade, which began about 30 years ago and which symbolizes the unification of Jerusalem. The same elements recommended that at least the parade’s route be altered. Maybe run it in Tel Aviv? I hear it’s very peaceful this time of year if you keep out of Arab Jaffa.

The flags parade will begin with a dance on stages set up on King George Street in downtown western Jerusalem, the safe part, and will continue with a march through several gates in the Old City that lead to the Western Wall, where the plaza will see a big rally that will be attended by public figures.

Among those calling for the cancellation of the flag parade was MK Esawi Frej (Meretz), who argued that “it only takes a small match to ignite a large fire. This match may be the approval of the settlers’ demonstration at such a sensitive time, which may repeat the Meron disaster. I call on the police to be decisive and prevent it.”

Note two main points in the words of Naftali Bennett’s future partner in the unity government:

The procession, according to Frej, is a “settlers’ demonstration,” not a joyous procession of Israeli citizens commemorating the liberation of their eternal capital; and note that Frej did not call on the Arabs to exercise restraint and avoid lighting matches.

“It seems like we insist on not learning from past mistakes. Surrendering to terrorism invites more and more harm to Jews. Terrorism must be cut down and defeated, we must not capitulate before it. Instead of preventing the movement of the victims of the attacks, the police should chase after the assailants. This is an unfortunate decision and I call on the police commissioner to reverse it.” 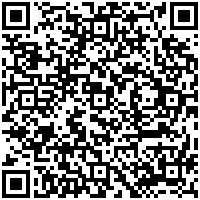