Israel is preparing for a few more days of fighting in the Gaza Strip, and in assessments of the situation and internal discussions, officials in the defense establishment have said that “first we’ll realize the goals of the operation, and only after that we’ll start talking about a ceasefire.”

This is the eighth day of Operation Guardians of the Walls. According to IDF Spokesman Brigadier General Hidai Zilberman, “There is a focus on three kinds of targets: the first is Hamas seniors and operatives; the second is infrastructure: underground targets, governmental targets, terrorists’ homes with the emphasis on battalions and company commanders; and the third target weapons, especially steep trajectory missiles and their launch systems.”

A senior Palestinian Authority official told News 11 on Monday that Israel should overthrow the Hamas regime in this operation, and not allow it to emerge victorious. “If Hamas comes out with a victory posture from this operation, and continues to be the ruler in Gaza – you’ll be causing strategic damage to the entire region, not just us,” he argued.

The same senior official added that the PA monitors events in its own territory and makes sure they do not get out of hand.

The main message of the conversation was that Israel has the right to defend itself, but the United States would be happy to see the operation ending in the coming days.

Negotiators from Egypt and Qatar claim that their attempts to bring about ceasefire negotiations have been the most difficult in recent years. There is disagreement among various mediators over whether Hamas is “ripe” for a ceasefire at this stage. A source told News 11 here that he is under the impression that Hamas has reached “ripeness” regarding reaching a ceasefire, but it wants to make sure what Israel’s position is. Hamas does not want to appear as if it was the first side that asked for a ceasefire. Israel is not ready to start the negotiations either.

At 10:30 AM Monday, Hussam Abu Harbid, a brigadier general of the Islamic Jihad’s northern Gaza Strip forced, was eliminated by Israel. Abu Harbid was responsible, among other things, for the shooting attack at the beginning of the operation,” according to Brigadier General Zilberman.

The brigade Abu Harbid commanded fired on Sderot was and was also responsible for firing the rockets in the two weeks prior to the current operation.

“The elimination was complex, and was carried out using fighter jets,” Zilberman revealed.

Abu-Harbid has been a Jihad commander for more than 15 years and was responsible for several anti-tank attacks, including the attack on the first day of the operation, in which a civilian was lightly injured. In addition, he consistently led rocket launches at the State of Israel during rounds of hostilities and fired at IDF forces.

Also on Monday, naval and aircraft fighters destroyed a Hamas mini-submarine, which was apparently on its way to carry out terrorist activity. Navy fighters have in recent days identified suspicious movements in the northern Gaza Strip and near the assets of Hamas’ naval force and followed several activists of the force and their movements in the area. They attacked the operatives and the weapons to thwart the threat.

On Monday evening, fighter jets and other aircraft killed five terrorist operatives who were preparing to launch rockets into Israeli territory.

During the night between Sunday and Monday, the IDF attacked about 35 Hamas terrorist targets in the Gaza “metro.” The attack on the metro in the northern Gaza Strip was carried out by 54 fighter jets for about 20 minutes, using about 110 accurate rockets. About ten miles of terrorist tunnels were attacked. 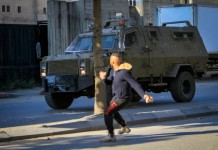