The violence in Jerusalem surrounding the Temple Mount crisis last month apparently had its roots in more than just payment by the Palestinian Authority government, according to new information cited in an article published Tuesday by Israel Hayom.

According to the report which quoted an unnamed intelligence official in the Palestinian Authority, the Islamic Republic of Iran was also “supporting” the protests against new security measures at the site.

Boxes of food and drink were being supplied to the tens of thousands of protesters, each containing a flyer depicting the Dome of the Rock, and including a quote allegedly by Iran’s Supreme Leader Ali Khamenei, reading:

“With the help of Allah, Palestine will be freed. Jerusalem is ours.”

The PA intelligence official was clear in the interview that it was “the regime in Tehran, by means of its long arms,” that provided the food. Moreover, he pointed out, “The sums come to millions of shekels, and the Iranians found an opening to reap the benefits and send a message to the Palestinian public right under Israel’s nose, that it is Iran that looks out for them.

“The flyer attached to all the food packages and the quotes of Khamenei make clear who is behind these food baskets.”

This is a new way for Iran to penetrate into Israeli affairs, but is also a way for Tehran to penetrate the hearts of Jerusalem Arabs who believe they are part of the Palestinian Authority.

Up to this point, Iran has contented itself with providing money, equipment and training to its terrorist proxy groups: Hezbollah, Palestinian Islamic Jihad, and Hamas, the latter having ruled Gaza since 2007.

An Iranian promise to reimburse Palestinian Authority families of terrorists in Judea and Samaria whose homes are demolished by Israel was subsequently neutralized by blocking its channels for providing the funds to the recipients.

But Iran has been clearly trying to work on extending its influence into the rest of the Palestinian Authority — as has been the Islamic State terrorist organization — for some time.

The Fatah-led Ramallah government has been equally wary of allowing Tehran to operate in its territory, given its desire for control of the region via its proxies, and its backing of Fatah’s rival, Hamas. Perhaps it is for that reason that despite his protestations and loud noises about suspending all contacts with Israel “at all levels,” Palestinian Authority leader Mahmoud Abbas has said nothing when other officials have quietly told reporters that eventually, gradually, those contacts will be resumed. Of course, it may also have something to do with the fact that Abbas is rumored to be in ill health … and his top gun, PLO Secretary-General Saeb Erekat, is now awaiting an urgent lung transplant to be carried out in the United States or in Israel. 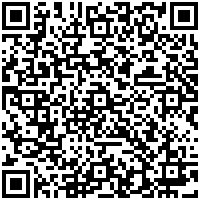