When you set a goal, do you concentrate your mental energy on the means to achieve it or on the aspired end itself? In the psychological literature on goal-pursuits, these two alternatives are called process focus and outcome focus. A process focus is more concrete, emphasizes the how, and accentuates the journey. An outcome focus is more abstract, emphasizes the why, and accentuates the destination.

Researchers are trying to determine which approach is more effective in getting a person to his goal. So far, studies have shown conflicting evidence. Some indicate that focusing on the process is more rewarding and less anxiety-provoking. Others indicate that focusing on the outcome encourages grit and perseverance. The secret may lie in striking a balance and alternating between the two.


The Torah tells us (Vayikra 23:15-16) to count seven weeks between Pesach and Shavuot, culminating in various sacrifices brought on the 50th day. Why? The Rambam writes that the entire goal of leaving Egypt was to receive the Torah; therefore, we enhance our appreciation for the end-goal of Shavuot by counting toward it (Moreh Nevuchim, 3:43). The Ohr HaChaim, on the other hand, focuses less on the end-goal and more on the purification process that was necessary after leaving the impurities of Egypt.

Sharing the Rambam’s outcome-focused approach, the Sefer HaChinuch (mitzvah 306) asks: If Sefirah is about anticipation, why do we count up (day 1, day 2…) and not down (day 49, day 48…) as we often do to build excitement? He answers that if we were to start counting with 49, we would get discouraged that we need to wait so long until we reach the goal, so we start with 1.

Approaching the question from a process focus, Rabbi Shimshon Pincus provides a different answer. Sefirah, he says, is not just a mathematical exercise, but an act of self-growth. Counting upward reflects the development and building we should be doing with each passing day.

Incorporating both these approaches during Sefirah can be beneficial. Rabbi Joseph B. Soloveitchik, quoted by Rabbi Shmuel Goldin, argues that both approaches are inherent in the word “sefirah.” In contrast to the word “minyan,” which connotes counting as a means to achieve an ultimate goal, “sefirah” connotes a counting with inherent worth; every individual unit is a goal unto itself (process). 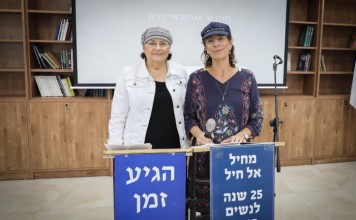