Prime Minister Benjamin Netanyahu told reporters at the Prime Minister’s Office in Jerusalem, in joint remarks with with US National Security Adviser Robert O’Brien and Senior White House Adviser Jared Kushner that it was a “special pleasure” to host his guests over the weekend, knowing they are to join a high-level Israeli delegation Monday on the first-ever Israeli commercial flight to the United Arab Emirates.


“We’re all thrilled by the pace, the swift pace of normalization between Israel and the UAE,” Netanyahu said.

“Yesterday, the Emirates officially abolished the anachronistic boycott of the Jewish state. This opens the door for what I can only call unbridled trade, tourism, investments, exchanges between the Middle East’s two most advanced economies. You will see how the sparks fly on this. It’s already happening.

“The day will come, and it won’t be far away, when we will ask: How could it have been any other way? Because today’s breakthroughs will become tomorrow’s norms. It will pave the way for other countries to normalize their ties with Israel.

“For far too long, the Palestinians have had a veto on peace, not only between the Palestinians and Israel, but between Israel and the broader Arab world. And if it were up to some of these Palestinians, Israel would have to withdraw to the indefensible ’67 lines, expel over 100,000 Jews from their homes in own ancestral homeland, divide our capital, Jerusalem, flood Israel with descendants of refugees, put our country at risk, while still refusing to recognize the one and only Jewish state.

“Two things have changed that. The first thing is the Trump plan and the second thing is the willingness of Arab states, supported enormously by the United States of America, to advance peace without a Palestinian veto.

“The Trump plan is the first realistic initiative for an Israeli-Palestinian peace. Israelis and Palestinians won’t have to leave their homes. No one will be uprooted. Areas of Jewish population and areas vital to Israel’s security are envisioned being incorporated to sovereign Israel, and Israel retains overriding security control in the areas west of the Jordan River, both on the ground and in the air.

“I’ve expressed my willingness to negotiate peace on the basis of the Trump plan. And as more Arab and Muslim countries join the circle of peace, the Palestinians will eventually understand that their veto has dissipated, and they will be hard pressed to remain outside the community of peace.

“We’ve been working at this for quite some time. Jared, you’ve been doing so in your own sphere, with the able help of all your teammates and President Trump.

“I was doing this from another direction. Three years ago, there were the first flights from Israel to India over Saudi Arabia, and I believe that the United States helped with that as well. Two years ago, I visited Oman. One year ago, I visited Chad. Half a year ago, I met with the leader of Sudan. And these are few of the publicized steps. There are many more unpublicized meetings with Arab and Muslim leaders who recognize that their true interests are to normalize relations with the State of Israel.

“Jared, from the start you said that more countries would make peace with Israel. You were dismissed, sometimes ridiculed, scoffed at. I’m glad that those critics have been proven wrong, dead wrong.

“It’s true that some countries still hold out, making perfunctory statements in support of Palestinian demands. But we know that reality has changed, because we have changed it. We are changing it as we speak. I want to thank you for everything that you are doing in this regard.

“These positive developments are not welcomed by everyone. While we seek progress and modernity, the tyrants of Tehran want to take us back to a dark age of theocratic medievalism. And if this murderous, terrorist regime ever developed nuclear weapons or the means to develop it, they would promptly scuttle the peace and they would endanger the entire world. We must not let that happen, and we will not let that happen.

“I want to commend President Trump for standing up firmly to Iran, for abandoning the flawed and dangerous JCPOA, for taking out such master terrorists as Qasem Soleimani, for triggering the snapback sanctions at the United Nations. I will be discussing these matters and more with National Security Advisor Robert O’Brien.

“In opposing Iran’s war machine, the United States is showing true global leadership. I note with satisfaction that, like Israel, countries of the Gulf Cooperation Council are now openly – and I stress the word openly – supporting the American position. They quietly and discreetly supported the opposition to the JCPOA, but now they’ve come out and openly supported the American position. And this reflects a change in the making. I call upon all countries to get behind the United States in confronting Iranian aggression.

“I want to thank each of you for your hard work. I want to thank President Trump for his steadfast friendship and support. Our common goals of peace, prosperity and security are at hand. And as we stand against the purveyors of terror and aggression, we also stand ready to till the fields of peace, and bring its bountiful fruits to our peoples, and to our entire international community, to the world.” 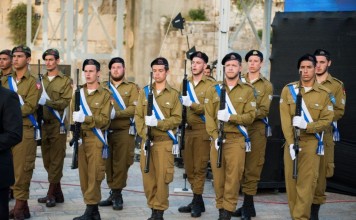