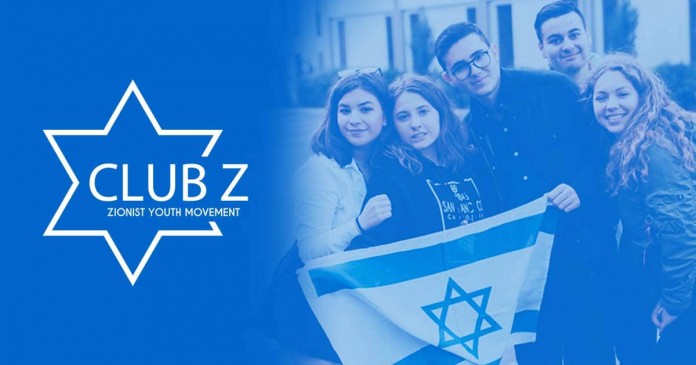 The Hebrew expression “hineni” means “here I am”, most famously used by the great Biblical defender of Israel, Isaiah, who responded to a heavenly call to duty with the words: “Here I am; send me”. Hineni encapsulates the spirit of Club Z (for Zionism), a network of Jewish American teens that are standing up for their people and their Zionist identity against the scourge of antisemitism that is on the rise across the US, with the latest FBI figures showing Jews — 2.4% of the population — were the target of nearly 60% of religious hate crimes in 2020.

Jew hate is at its most virulent on campus. A complaint filed last week against City University of New York includes a recorded 150+ incidents of antisemitism on their premises since 2015, more than 60 directly targeting Jewish students with the intent to harm them.


Among the allegations are students carving swastikas on school property, mandatory classes scheduled on Saturdays to prevent observant Jews attending, students using class time to accuse Israel of “ethnic cleansing”, endorsement of the antisemitic Boycott, Divestment, and Sanctions (BDS) movement, a resolution banning Jewish institutions on campus and even an adjunct professor calling to “erase this filth called Jews”.

Faced with such widespread animosity and contempt, as well as the cancellation of Israeli speakers and protests against those who support Israel, many Jewish students are tempted to keep away, keep silent or at worst take refuge in anti-Israel activism. Some choose to make a stand for their Jewish and Zionist heritage, a course that requires a strong sense of duty — duty to Israel and duty to themselves and their fellow Jews, because attacks on Israel are attacks on the dignity and honor of all Jews. Confronting this Jew hate, often widespread among their peers, also demands moral and sometimes physical courage. It is Club Z’s mission to help teenagers understand their duty and to find the courage to stand up and be counted.

As every commander knows, you do not train a soldier to fight when he is in the middle of a battle, you do it before he gets anywhere near the combat zone. That is Club Z’s strategy, to educate teenagers at high school before they arrive on the campus battlefield. It is the brainchild of San Francisco Bay Area mother Masha Merkulova, who 10 years ago searched for an institution to prepare her son for the fight, and finding none, made her own. Today she calls herself Chief Zionist Officer of Club Z, which has chapters in the Bay Area, Boston, Charlotte, Los Angeles, three in New York, and is looking to expand.

“I have too often heard students come to me shaken by egregious comments made by teachers or their peers. In schools, they are forced to defend against libels such as ‘Zionism is racism’ and that the IDF is a ‘baby-killing’ machine. Our children deserve the same protection and human dignity to freely express their Jewish identity as others. And yes, Zionism is integral to that identity. Our classrooms are inundated with anti-Zionism, a virulent denial of the basic right to self-determination. It is today’s most prevalent and potent form of antisemitism — an attack on a basic Jewish right masked as an anti-racism cause.”

High schoolers learn with Club Z for two or three years or more, attending regular education sessions, camps, and conferences, cutting their teeth confronting anti-Israel protests, organizing rallies, and challenging staff and students at their high schools when antisemitism raises its head, with alumni returning from university to share their experiences with current students. Club Z teaches young Jews to understand their collective past as the wellspring of their identity and values. It educates them in the truth about their historic homeland and gives them a depth of knowledge unrivaled among their peers about the political, legal, and security realities confronting Israel today, enabling them to counter the fabrications, half-truths, and distortions that make up the daily fare on many campuses.

“Our rigorous academic program molds students’ understanding of history, identity, and ability to unpack ideology, so that when they encounter antisemitism cloaked as anti-Zionism they are not merely armed with talking points, but have fully internalized this knowledge. We don’t tell them what to think, we teach them how to think independently, rising above the noise. They learn how to articulate their support for Israel and stand up to anti-Zionist rhetoric. We hone their leadership skills and arm them with a supportive network”.

“Kids naturally want to be like — and be liked by — their peers. But having the courage to stand up when something is wrong and to know they deserve to be treated with respect is ultimately strengthening. And it helps knowing we’ll always have their back.”

There is no doubt this approach works. Club Z students and alumni have an impressive record of activism against Jew-haters, including defeating BDS initiatives on campus and maintaining an influential social media presence. Los Angeles high school student Joey Karlan explains what the group has done for him:

Yahya Mahamid, an Israeli Muslim Arab who often lectures groups of young Jews, held a discussion with Club Z students during a recent trip to Israel and remarked:

“I’ve never engaged with a group of teens that had this much knowledge of Israel and were so confident in standing up for themselves and their people”.

Victimhood culture, too often the corrosive first resort of those who face injustice or feel wronged, is not in Club Z’s creed. Students are taught that an individual’s character is defined not by what obstacles are thrown in their path but by how they have overcome those obstacles and turned them to advantage.

Speaking to the pupils of Harrow, his old school, in October 1941, UK Prime Minister Winston Churchill exhorted them not to see themselves as victims, not to think of these war years as “dark days”. Even though Britain remained almost alone against the Nazi menace, had suffered defeats in the field and murderous air attacks at home, with the Soviets still reeling under a colossal assault and America not yet in the war, he told the schoolboys:

“These are not dark days; these are great days — the greatest days our country has ever lived; and we must all thank God that we have been allowed to play a part in making these days memorable in the history of our race”.

“At Club Z we learn that we as Jews stand on the shoulders of giants. We come from a lineage of courageous leaders like King David, Theodor Herzl, Mordechai Anielewicz, and Golda Meir. We try to take after these brave individuals as we fight our own battle against Jew hate. I don’t see our battle as a burden, I see it is an honor, because we’re fighting for our dignity, our reputation, our faith, our safety, our home and our future”.

Karlan and his fellow Club Z teens are not aggrieved victims but active and proud defenders. They know that weakness incites while strength deters, that keeping quiet about antisemitism, meeting the bullies halfway, or compromising with calumnies does not protect them, does not make the problem go away, and does not diminish the diatribe against them.

Club Z alumnus Phillip Yurchenko defied Jewish community leaders who advised him to lay low in the face of an antisemitic demonstration at his university. He told them: “I will not stay low-key when I see antisemitism. I will always be respectful, but I will not be quiet”.

Merkulova backed him up: “Students followed what we preach: speak up against antisemitism and the delegitimization of Israel on campus.”

“Teens push boundaries – that’s what we do so who better to challenge the hate against Israel than those of us who couldn’t care less for the status quo? We all know that fighting our enemies is an uphill battle, but it’s our uphill battle”.

There is more here, though than teenage rebellion. I have watched 16 and 17-year-old Club Z students courageously put up their hands to publicly confront seasoned activists three times their age, step forward to challenge adult propagators of libelous anti-Israel abuse on their own territory and heartily sing the Hatikvah amidst malevolent crowds as they descend from the Temple Mount. Courage cannot be taught but it can be fortified, and that is fundamentally what Club Z does. It is what empowers these teens to say, as the finest soldiers say when there’s a perilous task to be done: “Here I am; send me”.

(You can sign up or support Club Z here: https://clubz.org/get-involved/)

{Reposted from the Gatestone Institue site}