For the first time, the State Department has explicitly accused the Palestinian Authority (PA) of promoting anti-Semitism, a signal Jewish groups are hoping will lead to a change in U.S. policy.

Previously, U.S. officials had labeled the PA denial of Jewish ties to Jerusalem as “material criticizing the Israeli occupation,” but stopped short of calling it anti-Semitism. Arab media channels that carried the anti-Semitic content were “nonofficial PA and nonmainstream,” according to last year’s report.

The Obama administration no longer says the PA is working “to control and eliminate” expressions of anti-Semitism in its media outlets. Officials dropped an assertion made in previous years that the PA acted to “prevent preaching” of “sermons with intolerant or anti-Semitic messages.”

For years, Israeli leaders have accused the PA and its leader, Mahmoud Abbas, of inciting violence and anti-Semitism. Last year amid increasing terror attacks on Israelis, Abbas called for Jerusalem’s holy sites to be cleansed of Jews.

“Every drop of blood spilled in Jerusalem is pure, every shahid [martyr] will reach paradise, and every injured person will be rewarded by God…. The Al-Aqsa mosque is ours. The Church of the Holy Sepulchre is ours as well. They [Jews] have no right to desecrate the mosque with their dirty feet, we won’t allow them to do that,” Abbas said in a Sept. 2015 address on Palestinian TV.

With the U.S. on the record calling the PA activity anti-Semitism, it could be a step closer to a change in U.S. policy toward the PA, which is overdue, Nathan Diament, executive director of the Orthodox Union’s Advocacy Center in Washington, D.C., told JNS.

In 2015, the House of Representatives unanimously adopted a resolution condemning the Palestinian Authority for “promoting anti-Semitic and anti-Israel rhetoric in its official statements, media, and textbooks.” The measure was authored by U.S. Reps. Ileana Ros-Lehtinen (R-Fla.) and Ted Deutch (D-Fla.).

Deutch told JNS he believes that many of the Palestinian terrorist attacks against Israelis during the past year “stemmed directly” from the kinds of anti-Semitic statements cited in the State Department report.

Several Jewish organizations are hoping the report will spur action on Capitol Hill.

“The question is whether Congress will finally move beyond condemnations and seek to make U.S. aid to the PA conditional on ending anti-Semitism in the PA media,” said Sarah Stern, president of the Endowment for Middle East Truth (EMET), a pro-Israel group based in Washington.

“It will be harder for the Obama administration to oppose such a step now that the State Department is on record acknowledging the PA’s anti-Semitism.”

Though Scham said “we neither excuse nor justify any expressions of anti-Semitism and condemn them,” he believes Palestinian anti-Semitism “will die down” only with a two-state solution.

Meanwhile, others would like to see the U.S. hold the Palestinian Authority accountable, not reward it. Future U.S. and international aid to the PA “should be linked to zero tolerance for anti-Semitism,” said Rabbi Abraham Cooper, associate dean of the Simon Wiesenthal Center. “If not, the PA will continue [its anti-Semitism] with impunity. If there are no consequences for such actions, they will only continue and mushroom.” 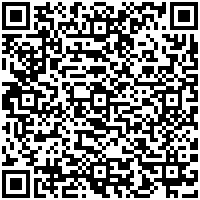