Police forces on Sunday evening surrounded a home in the Israeli community of Yitzhar in Samaria to arrest Neria Zarog, a resident who has openly defied an IDF administrative order banning him from the northern Shomron area, which includes his own home.

Zarog, a married 21-year-old father of two, who works as a shepherd, received an administrative order forcing him to leave the area and his home for three months. Zarog lives in the Kumi Ori outpost, which is a southern neighborhood of Yitzhar.

Despite the order, Zarog stayed in Yitzhar for two months, publicly called for its nullification.

It is unclear why Zarog had an administrative order placed against him in the first place.

Minister Bezalel Smotrich described the administrative orders against settlers and Zarog as draconian and robbing them of due process.

One unconfirmed report is that Zarog built his home in Area B, where the army and Civil Administration do not have the authority to destroy it, so the army instead ordered Zarog to leave the area completely, which is in their power to do.

After Zarog publicly announced that he is defying the administrative order, police began searching homes in Yitzhar looking for him, and as videos on social media show, the searches were done in a very heavy-handed manner against local residents.

The events and violence that ensued after the police managed to find and surround Zarog spanned over five hours on Sunday night.

Zarog chained himself down to a fortified structure, making his arrest difficult for the police. They knocked down a wall in the home and used heavy tools to cut through the chains.

Clashes between hundreds of Yitzhar residents and police forces began outside the home.

A reporter for HaKol Hayehudi was injured by police.

According to a police statement, the residents rioted violently while throwing rocks, cans of paint and heavy objects at the officers as they attempted to enter the home and make the arrest.

Police forces arrested three Yitzhar residents who were involved in the riots.

Following last night’s incident, Prime Minister Benjamin Netanyahu called for “the law to be respected and for an immediate halt to violence against the security forces.”

“IDF soldiers and Border Police forces, which guard us all, must be allowed to carry out their work. Violations of the law will not be tolerated,” he added.

Zarog’s lawyer, Nati Rom of the Honeinu human rights organization, said that his client is exhausted and that he was injured during the arrest.

“Neria is exhausted and hurt. Seeking to displace a man from his home, his wife and his children – this has no place in a democratic state,” he said.

The clashes during Zarog’s arrest were the latest in a series of violent incidents between Yitzhar residents and security forces in the area. 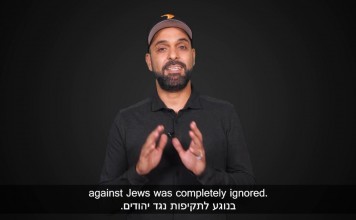