Arizona Governor Doug Ducey arrived in Israel on Jerusalem Day for talks with political and business leaders in the Jewish State.

Proud to be in Israel on Jerusalem Day marking the 55th anniversary of the reunification of Jerusalem during the Six Day War in 1967. Jerusalem is the eternal and indivisible capital of Israel.


Ducey landed Sunday morning at Ben Gurion International Airport, accompanied by the heads of the Arizona Chamber of Commerce and Industry, and the Arizona Commerce Authority.

A blessing to be back in Israel! I look forward to a successful trip visiting important biblical heritage sites and meeting with leaders and businesses with a focus on water conservation, border security and trade issues.

Ducey’s meetings are set to focus on trade, water and border security, according to his spokesperson C.J. Karamargin.

Arizona faces many issues similar to those in Israel due to the state’s dry, arid climate, and its porous southern border with Mexico.

The governor has spent the past seven years in office strengthening his state’s ties with the Jewish State.

Another Prominent Visitor Arrives on Jerusalem Day
In addition to Ducey, 47-year-old actor Leonardo DiCaprio arrived in his private jet on Sunday to attend the wedding of a friend Sunday evening at Soho House in Yafo (Jaffa).

This is DiCaprio’s third visit to the Jewish State.

He plans to attend the wedding of Israeli-born American actor and filmmaker Danny A. Abeckaser, a close friend, to a 21-year-old Instagram model from Be’er Sheva. 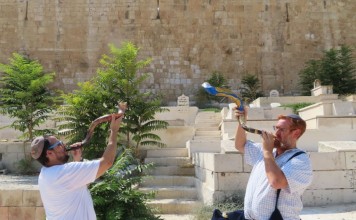