Question: When a son says Kaddish for his parents, can they hear it? Also, are their souls elevated to a higher place as a result?

Summary of our response up to this point: We discussed the source of Kaddish, when to recite it and for whom. We also explained why we say it in Aramaic as opposed to Hebrew. We touched upon the pivotal role it plays in the relationship of a child and his departed parent. We also related Kaddish’s great efficacy in bringing relief to a departed soul.

We noted that the enormous power of the mourner, and those who respond to Kaddish, to vanquish the severest sins. We explained what the words of Kaddish mean and what one should think about when saying them. We also noted that Kaddish contains a specific number of letters and words and that many authorities (although not the Gra) require one to bow at certain junctures when saying it.

“Jewish custom is for a mourner for the duration of his year-long mourning period to lead the prayer services…. If one wishes to lead the services and he is more suited due to his Torah scholarship and fear of Hashem, we should let him even if he is not a mourner.”

“Now, if [a mourner] is not leading the service, he should recite the Kaddish preceding the prayer and one following the prayer – not more. This Kaddish should be recited at the pulpit from where one leads the service, or nearby, and in a loud voice. He shouldn’t rush through it; rather, he should say it with a properly-paced speed.

“If there are many [mourners saying Kaddish], it is proper for them to recite it in unison. Far better, though, is to divide [the Kaddish recitals], with some saying after Aleinu and some after the Shir Shel Yom. And if there is only one person reciting Kaddish, then better to say Aleinu and the Yom without interruption and then one Kaddish after both of them.

“Regarding Kaddish D’rabbanan: The main purpose is to recite it when a group [of 10] learn together, and they understand what they’re learning. The custom to recite a mishnah in order to recite Kaddish is not proper.”

Rabbi Henkin concludes. “And I am aware that the masses do not follow this; nevertheless, it is the proper procedure for those who delve into this matter.”

Interestingly, the Mishnah (Megilla 21a) rules that if two people read the megillah on Purim simultaneously, those hearing these readings have fulfilled their obligation. The Gemara (infra 21b) states that this rule does not apply to Krias HaTorah or the reading of Nevi’im. Why?

Rashi (s.v “u’bilvad she’lo y’hei…”) writes “trei koli lo mishtami – two simultaneous voices cannot be heard.” But can they be heard on Purim (or for the reading of Hallel)? The Gemara responds: “Even if 10 would read together, the ones listening would fulfill their obligation because Hallel and the megillah are so beloved that a person is sure to listen very attentively.”

In earlier times, only one person was allowed to recite Kaddish for the reason Rashi gives. (To this very day, the Yekkish community follows this practice.) How, then, did other mourners fulfill their obligation? Through the rule of shome’a k’oneh – listening is as if one recited (Sukkah 38b).

Over time, though, this rule was waved and multiple mourners were all allowed to recite Kaddish. However, if we are to include this exception along with reading the megillah or Hallel, it must be recited distinctly. In my shul, I followed the longstanding practice of many other shuls and instituted that all mourners recite Kaddish while standing at the bimah, clearly and intelligibly, so that everyone can hear and respond.

It’s important that the niftarim, for whose benefit we say Kaddish, hear what we say on their behalf. If the people say Kaddish muddle through it and can’t hear what they’re saying, what can we say about those precious souls in the Next World trying to make out their words? 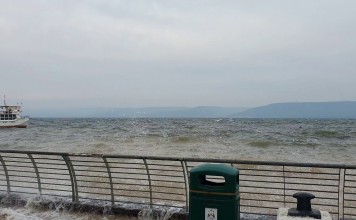