Four construction workers were killed at a building site in the city of Yavneh on Sunday when a crane at the site collapsed on them.

United Hatzalah EMT Yoni Uziyahu reported that four people have been confirmed dead at the scene of the crane collapse on Jabotinsky Street in Yavneh.

They were killed when concrete slabs, used to balance the crane, fell on them.

Firefighters battled to rescue a fifth person stuck on the crane itself.

Since the beginning of the year, 57 construction workers have been killed in accidents. The main cause of the accidents is the disregard of safety guidelines and the lack of their enforcement. 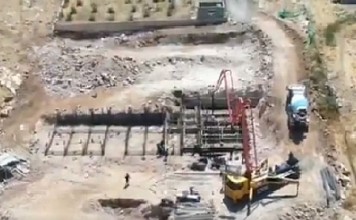