MKs Aryeh Eldad and Michael Ben Ari are leaving the National Union party to set up “Power to Israel,” with a slogan that translates, roughly, “No Duties – No Rights.”


Eldad and Ben-Ari announced their new party at a press conference in Jerusalem Tuesday morning.

MK Eldad, a renowned plastic surgeon who decided to devote his life to preventing the establishment of a Palestinian state, said at the conference: “We announce the establishment of a new Knesset faction, but you can’t talk politics without talking about southern Israel. At this hour, a million civilians are in shelters under the threat of missiles, while a government I can only describe as crazy continues to provide water and electricity to the Gaza Strip. This is one of the things we want to change as we stand as a new faction in the political arena. The lack of security in the south also reflects a picture of insecurity in central Israel. Terrorism threatens us from the outside, and the terror of illegal infiltrators threatens us from inside, and we will deal with both.”

Eldad described a vacuum on the right: “Liberman has joined Netanyahu and is now sitting in one list with Dan Meridor. Deri is dragging Shas to the left, to the Oslo days, and therefore there is a need for an ideological right-wing that will say things that have been forgotten: Without duties you cannot have Rights. The Land of Israel belongs to the people of Israel. The National Union is collapsing, this is no way to run a political system. We bless our colleagues, Ketzele and Uri Ariel, who are returning home to the NRP. We have no doubt that they will take care of the national-religious sector, but we have a different agenda.”

Eldad was referring to MKs Yaakov Katz and Uri Ariel, his partners in the now abandoned National Union faction, who will be running to the 19th Knesset on the Jewish Home list.

MK Uri Ariel attacked Eldad and Ben Ari’s decision in an interview on Arutz-7 (owned by his partner, Katz). “I’m very upset about this move,” he said. “We approached them and offered in writing to go together and lead the National Union to winning a lot of seats and to serve as an anchor for the Netanyahu government, but, unfortunately, they chose to split.”

MK Ariel warned that Eldad and Ben-Ari will not pass the threshold vote (about 2%) and end up causing great damage to the right and to Israel.

Michael Ben-Ari explained that his new party “means what it says, it’s not just talking, it’s doing. We will join the coalition not for positions or budgets, but only for the implementation of the principles that will add power to the State of Israel. We represent loyalty to the people of Israel.”

As an example of wrongdoing, Ben-Ari added: “MK Benny Begin just boasted of transferring funds to the Arab municipal authorities. Are they paying municipal taxes over there? Are they paying income taxes? First do your duty, then receive your Rights, this is our message.”

Incidentally, a recent poll predicted that a new party headed by Eldad and Ben-Ari should pas the vote threshold and receive two Knesset seats. 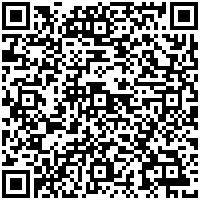