Nancy Pelosi, the Democratic Minority Leader in the House, literally turned her back on Prime Minister Binyamin Netanyahu Tuesday when she stood up with everyone else after he said, “Even If Israel has to stand alone, Israel will stand.”

After her demonstrative insult to the Prime Minister if not to Congress, she issued a statement:

As one who values the U.S.- Israel relationship, and loves Israel, I was near tears throughout the Prime Minister’s speech — saddened by the insult to the intelligence of the United States as part of the P5 +1 nations, and saddened by the condescension toward our knowledge of the threat posed by Iran and our broader commitment to preventing nuclear proliferation.


She did not join approximately 50 Democrats who boycotted the speech. Instead, she sat and made all kinds of gestures to Democratic Minority Whip Steny Hoyer before finally standing up and turning her back.

We don’t know whether she turned her back because she can’t stand the idea that Israel can stand by itself, without her, or because she was disgusted that her colleagues stood for so long and applauded Netanyahu.

Or perhaps she had a pain in her back. 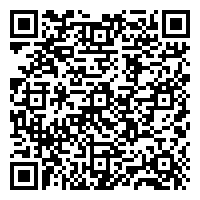