After three years of work, give or take, President Donald Trump’s deal of the century to resolve the Israeli-Palestinian conflict will be presented to the whole world Tuesday afternoon, the president announced Monday during his meeting with Prime Minister Benjamin Netanyahu at the White House.

Ahead of the plan going public, Netanyahu spoke last night from Washington with the heads of municipal councils in Judea and Samaria, trying to convince them that the declaration of a Palestinian State is not as bad as it sounds, Kan 11 reported.

At the same time, Netanyahu hinted that he plans to submit to his cabinet a proposal to annex some territory in Judea and Samaria, without indicating which territory. Of course, as opposition spokespeople have repeatedly argued in recent weeks, Prime Minister Netanyahu can annex any area he wants by issuing a simple decree that a particular area has been annexed. The process does not require anyone’s consent.

Speaking to the heads of communities in the liberated territories, Netanyahu tried to persuade them to agree to the statement on a Palestinian state provided by the Trump plan. He explained that this kind of statement would have no dramatic consequences and that the Palestinians would have to comply with all the requirements prescribed by the plan to be able to turn the promise of a state into a real thing.

In other words: Israel continues to trust the Palestinians to torpedo their own chances of winning a state. It’s not such a bad strategy, considering the historical record since the UN vote on the partition of the land of Israel on November 29, 1947, if not before that.

According to Netanyahu, the Trump agreement is the first one which is not based on the establishment of a Palestinian state in the 1967 borders, but instead offers an American recognition of the application of Jewish sovereignty to parts of Judea and Samaria.

Incidentally, Trump believes his plan is good for the Palestinians, “even too good,” as he put it. He speculated that they would eventually support his deal, noting that many Arab countries already support it and call it “a good start.”

Meanwhile, the Al Hadath news channel has reported citing US sources that the Trump plan does, in fact, include the two-state solution. The plan also leaves the situation on the Temple Mount as it is, under the control of the Jordanian government. The report also states that the US will leave up to Israel the option of annexing the Jewish settlements, acknowledging that this is the existing reality and there is no turning back from it.

Prime Minister Netanyahu, for his part, said that the deal of the century was a “once in a century opportunity and we will not miss it.” Sources in his entourage told Kan 11 that the two leaders’ meeting was “excellent” and that the peace plan was discussed, but most of the meeting was devoted to the Iranian issue.

And that’s how you focus the nation’s attention on the real problems. 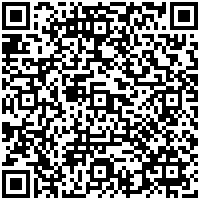