The protest against Prime Minister Benjamin Netanyahu continued Saturday night for the 18th week in a row. Police forces were enhanced to maintain order in demonstrations in Jerusalem and throughout the country.


The Police announced that they endeavor to guarantee people’s full right to protest, but will strictly enforce the corona guidelines regarding the protests.

Thousands marched in Jerusalem in several, separate processions toward the main protest on Balfour Street in Jerusalem, where they congregated in front of the prime minister’s residence, while many more gathered in front of Netanyahu’s private residence in Caesarea. In addition, the Black Flags protest continued at intersections and overpasses with tens of thousands of Israelis going out to demonstrate in hundreds of locations across the country.

In Jerusalem, seven demonstrators were arrested on suspicion of violating the public order and assaulting police officers. Six of the seven protesters were released on restrictive conditions. Another detainee, a young woman, was detained for questioned at the Moriah station in the city.

Police opened an investigation following a video showing a protester in one of the Jerusalem processions attacking another person. There’s also a video from one of the marches that allegedly shows a policeman strangling a demonstrator.

The Police arrested several young men on suspicion of violence against demonstrators. One of the detainees, a delivery man of restaurant takeouts who rode an electric bicycle near Rabin Square in Tel Aviv, was arrested on suspicion of trying to run over protesters. Some of the protesters at the venue claimed that it was the same delivery man who used pepper spray on protesters last week. Police also arrested another 18-year-old man who tried to break onto the stage in Rabin Square and disrupt the public order. A 17-year-old youth was detained on suspicion of throwing eggs at demonstrators in the Mediatech plaza in Holon, and three young adults were detained on suspicion of threatening protesters in Tel Aviv with an electric shocker and then fleeing. They were arrested shortly after a search by police at the scene and taken for questioning.

The head of the Jerusalem District Operations Branch, Chief Superintendent Alon Kalfon, summed up the demonstrations in the capital, saying: “Two processions of protesters marched through the city and concluded here (Balfour Street). These processions, which were not coordinated with us, created risks. We arrested one of the organizers for inciting and holding a dangerous procession.”

A demonstrator in the Horev Center in Haifa complained to the police that a man in a car next to the demonstrators attacked her with a stick with the Likud flag on it through his car window.

Black Flags protesters in Beer Sheva said that glass bottles were thrown at them from a high floor, and two women were slightly injured but did not require treatment. The demonstrators claimed that police came to the scene but did not go up to the apartment from which the bottles had been thrown. 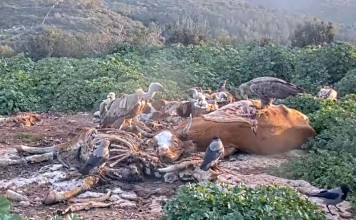 A Seuda Fit for the King of Birds