Were two Palestinian teenagers shot to death in cold blood by Israeli soldiers on May 15, nakba day?

Palestinians say that video evidence shows that two youths were shot far from any action, when they were not threatening soldiers or Border Patrol officers in any way. This is in effect an accusation of murder.


While we don’t know (yet) for certain what did happen, it seems clear that the Israelis that were accused of shooting them did not do so — and most likely they were not shot with an Israeli military weapon.

There are two videos in question. One is taken by security cameras at a nearby business, and another was taken by a Palestinian cameraman working for CNN, Kareem Khadder.

The security camera footage shows two Palestinians falling to the ground (about 73 minutes apart). It does not show their faces. The first one is Nadeem Nouwareh (also called Nadeem Abu Qaraa in some reports).

Nouwareh, who is supposed to have been hit in the chest, falls forward and puts his hands out to break his fall. Experts say that this is unlikely, that someone hit in the chest with a high-powered bullet will normally be pushed back by the force of the bullet.

The Khadder video shows a nearby Israeli position. The camera shows one of the Border Patrol officers firing and then quickly pans to the location of the Palestinians, where they are seen rushing to pick someone up and put him in an ambulance. It does not show either of the two being hit.

The weapon used by the Border Patrol officer has a rubber-bullet cassette clearly visible on the barrel. The cassette holds the rubber bullets, which are propelled by firing blanks from the rifle’s normal magazine.

While it is possible to fire live ammunition with the cassette in place, the sound of the shot is quite different, and would have been noticed by everyone at the post. Unless there was a conspiracy including all the Israelis present, this did not happen.

CNN’s broadcast includes an interview with Nouwareh’s father, who displays a bullet he says was found in Nadeem’s backpack after it passed through his body.

The spent bullet that is displayed looks like a 5.56 mm bullet of the type that is used by Israel (and also by the weapons supplied to the Palestinian security forces by the US). Bullets like this can be picked up at firing ranges around the country.

The bullet, which supposedly penetrated Nouwareh’s chest, exited his back, and then was stopped by a hard object (like a book) in the backpack, is only slightly deformed. An expert interviewed by Israel’s Channel 2 — and another that I spoke to — both said that it was certain that under these circumstances it would have been crushed almost flat.

The backpack has a small hole and a small bloodstain on it. Inside, the father displays a book that appears to have a red substance wiped across it. I can’t see how the bullet would have carried that much blood inside, or why it would be smeared across the page.

The second victim is Mohammad Odeh Salameh (initial reports gave his name as Mohammad Mahmoud Odeh Abu Daher), said to be hit in the back with the bullet exiting his chest. In the poor quality security video, he appears to be hit, falls to his knees, and then rolls over. The CNN broadcast shows a still picture of him on the ground, apparently after the shooting, taken by Palestinian photographer Atef Safadi. Here is a screen capture from about 2:48 into the broadcast:

“Between Kyiv and Gaza” – The Ukraininization of the Palestinian narrative 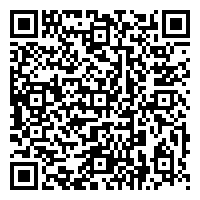