Today’s situation of riots, anarchy, and anti-Jewish violence, has a lot of parallels to the Crown Heights riots of ‘91, and one of them is this: Jews in middle and southern Brooklyn are under siege again. The government, the police, and to a large extent, the organized Jewish community supposedly here to defend us, are AWOL. And while some of these problems are national, the violence against the haredi community began before the riots.

As anti-Jewish and especially anti-Orthodox violence began rising in Crown Heights and elsewhere in Brooklyn, groups like the ADL declined to point a finger, and seemed to think teaching elementary kids slogans of tolerance was a sufficient answer to assuage the increased violence from adults. But our institutions appear to have never asked the question: Who has been agitating against us locally?

This was unfortunate, even irresponsible, as the violence does appear to be coming at least in part from a perceived turf battle over territory, with the Jews as the “colonizers” in that battle. And we can identify at least two organizations promoting that narrative that have enjoyed nothing but fawning media approval, from the NY Times to Buzzfeed, and zero resistance from the ADL or any other Jewish organization.

Two radical activist organizations that are particularly noteworthy in their aggressive stands against the Jewish community for the sake of “anti-gentrification” are Decolonize This Place and Equality for Flatbush.

Decolonize This Place posted an instagram of George Floyd wearing a Palestinian kefiah even though he was not Muslim, never mind Palestinian.

A strong ally of Decolonize This Place in degrentification efforts, Equality for Flatbush (E4F) has consistently taken credit for coordinating harassment of a “Karen” who they (in fact falsely) claimed organized to call the police on the endless industrial-grade fireworks as denying working people sleep for months on end is seen as a legitimate and effective weapon against gentrification. Like Decolonize This Place, E4F believes a critical element to NYC real estate wars is based in…Palestine. As E4F says, “People Power Movement say from Kingsbridge, Bronx to #Palestine #gentrification is a crime”.

What are these groups really doing by associating gentrification with the Arabs in the Israel-Arab conflict? They are identifying the enemy in their struggle. And it isn’t the IDF. What does Palestine have to do with gentrification?

“The legacy of the US is built on the invasion and theft of land from the Indigenous Peoples of the Americas, to the current theft of land from historically low-to-middle income communities of color by city governments and real estate developers. Many of the tactics displayed in Palestine are mirrored in the struggles within cities here in the United States, from environmental racism and the denial of safe drinking water, to the segregation, imprisonment, and disenfranchisement of communities of color struggling for justice. The struggle against gentrification is global. What we face in Brooklyn is just the latest in a long line of colonizing ventures aimed at the appropriation of land and resources from Indigenous peoples, people of color, and working class communities. We stand shoulder-to-shoulder with all those fighting for liberation. BAN stands in complete solidarity with the struggle for Palestinian liberation, decries Israel’s occupation and human rights abuses, and calls for an immediate end to United States’ funding of this apartheid regime.”

While we have all read more coherent arguments, the identity of the “invaders” and the “theft of land” is clear.

And just as these degentrification orgs deny the Jewish people’s connection to the land of Israel and dismiss them as colonizers, so too they deny the historic Jewish character of the neighborhoods in mid-Brooklyn. E4F is specifically focused on Flatbush and East Flatbush, and defines those neighborhoods quite broadly.

The all night #FlatbushFireworks harassment which has gone on for months was at the very least protected from shutdown and promoted as legitimate and healthy anti-gentrifier protest by E4F to the uncritical reporting of Buzzfeed, the NY Times, and others. And the point was harassment of “gentrifiers.” When one woman attempted to organize to stop the nightly industrial firework harassment, E4F set upon her with overt, racist hatred.

“Equality for Flatbush, which calls itself a “people of color-led, multinational grass-roots organization that does anti-police repression, affordable housing and anti-gentrification/anti-displacement organizing,” lashed out at a now-deleted Facebook group, Peaceful Ditmas Park, and a law professor who helped write the petition.

Equality for Flatbush said Peaceful Ditmas Park was “a majority-white Facebook group where pro-gentrification and white supremacist sentiment is highly prevalent” and called the law professor, Irina Manta, a “Ditmas Park Karen,” using what has become shorthand for an entitled white woman.

The organization also put out a statement calling summertime fireworks “a culturally accepted norm of Brooklyn” and “an act of resistance and a show of solidarity with the global #BlackLivesMatter rebellion.”

These groups attack “gentrifiers,” but on their websites and social media accounts, it is clear whom they really mean.

Through the constant reference to Palestine and the “colonizers” in Palestine and Brooklyn, it is clear that Jews are to blame for Brooklyn as well. It is worth noting that Brooklyn Borough president Eric Adams backed E4F’s absurd and deadly demand for protection of fireworks harassment from police intervention.

Beyond “Palestine to Brooklyn” comparisons, E4F has a consistent habit of villainizing hasidic landlords in pictures, protests, and copious videos to make it clear who is disproportionately responsible for “colonizing” their neighborhood.

The Jewish community appears unaware of the significance and relevance of these groups, even though they are critical in pushing a narrative of hate and overt harassment. Though there are a few notable exceptions such as City Councilman Chaim Deutsch, these groups are presented as heroes without any skepticism from the mainstream press or pushback from the organized Jewish community, and that should give us pause.

No one is going to stand up for us if we don’t stand up for ourselves. Just the opposite, as Equality for Flatbush support includes Jewish led orgs such as Soros’s Open Society Foundations via subsidiaries, including their fiscal sponsor, Black Alliance for Just Immigration.

These anti-gentrification groups will continue to target the Jewish community for hate and harassment. And they are much stronger and better positioned than before the riots started, and presumably, much better funded. 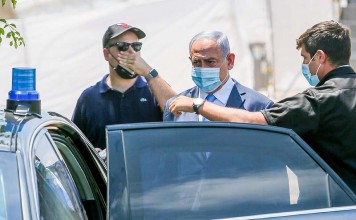