Vice President Kamala Harris made news the other day after the media reported on her exchange with a student, a self-identified Yemeni and Iranian, who accused Israel of committing “ethnic genocide” against Palestinians. The occasion was the vice president’s appearance last Wednesday before a political science class at Virginia’s George Mason University, and her response was very troublesome.

The following exchange took place after a short presentation by Ms. Harris on how democracy works.


Student: “You [VP Harris] brought up how the power of the people and demonstrations and organizing is very valuable in America, but I see that over the summer there have been protests and demonstrations in astronomical numbers standing with Palestine… But then just a few days ago there were funds allocated to continue backing Israel, which hurts my heart because [it] is ethnic genocide and displacement of people, the same that happened in America, and I’m sure you’re aware of this…. Americans are struggling because of a lack of affordable housing and all this money ends up going to Israel… The people have spoken very often of what they do need and I feel there is a lack of listening….

The Vice President: “Your vote is an expression of your voice, and we should never support anything that would stifle a person’s voice…. [Y]our voice, your perspective, your experience, your truth should not be suppressed…. The point you are making about policy that relates to Middle East policy, foreign policy, we still have healthy debates in our country about what is the right path and nobody’s voice should be suppressed on that.”

But nowhere does the student complain that she or her kindred spirits were denied the opportunity to speak their minds on Israel or about anything else. All she was complaining about was that not enough people were being persuaded by what she and her cohorts had to say.

Seems to us that not only was there a missed golden opportunity for the VP to tell the student that most people don’t agree with her, and suggest that maybe they all know something she doesn’t, but instead the vice president stretched the point to imply that the question of Israeli “genocide” was open for debate. Can this really be what she believes?

Is she unaware that Israeli security policies are driven by their experiences in defending against several Arab wars of liquidation, of Palestinian terrorists aiming to drive the Jews of Israel into the sea? Is she oblivious of the fact that Mahmoud Abbas notoriously rewards Palestinian terrorists for attacks against Israelis? Has she never been briefed on the extraordinary deals offered to the Palestinians by the Rabin and Olmert governments?

Does the vice president really think it an open question whether Israelis wake up each morning to thoughts of how best to oppress Palestinians that day?

Predictably, Kamala’s office was quick to claim innocence. And just as predictably, the Democratic “amen corner” was quick to carry its water. As the ADL’s CEO, the sycophantic Jonathan Greenblatt tweeted:

“Just spoke with @VP office. Glad to hear her confirm she is proud of her record supporting #Israel, and knows claim it is committing ‘ethnic genocide’ is patently false. Looking fwd to a clearing of the record so there’s no ambiguity that what that student said was hateful /wrong.”

What is concerning here is that a vice president of the United States ordinarily has an obligation to reflect the policy views of his or her President. Yet the views expressed by the GMU student are sharply inconsistent with the Biden Middle East policy. So at all events, Ms. Harris should have signaled some disagreement rather than nod in seeming, if not actual, assent. And because of the recent spike in anti-Semitism, at least partially triggered by anti-Zionism, perhaps she had a special duty to unambiguously disavow the student’s views. 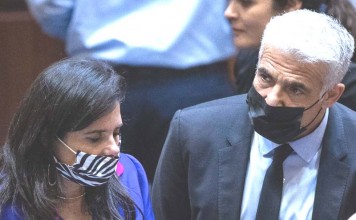