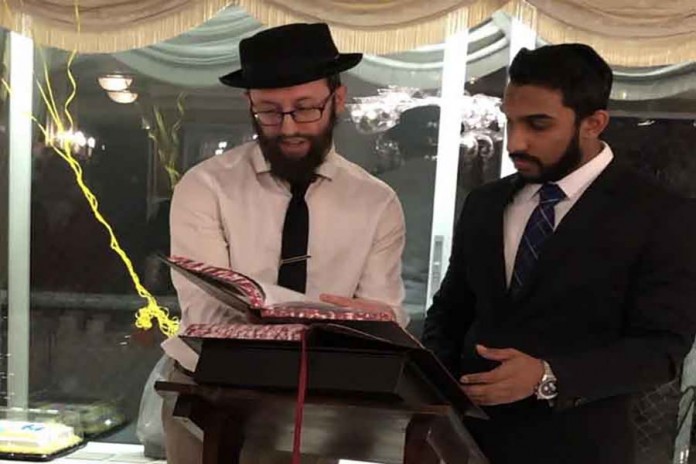 This story begins 3,332 years ago in a desert far, far away. On a small mountain-peak, the Creator gave the Torah to a diverse group of freshly-freed slaves. A few thousand years later, some of their descendants were expelled from Portugal during the infamous Spanish Inquisition. One family ended up in Sri Lanka, sojourned there, and lived as proud Jews until the tragic passing of their Patriarch Yaakov Tissera ben Miriam, z”l. Then, in their search for a better future and to pursue their Judaism, they immigrated to the United States.

A boy was born to this family. He descended from a proud line of Orthodox Sephardic Jews and was given the name “Yosef Yehudah.” Like the Biblical Joseph, his life drastically changed in his teen years. He arrived at LPJC at fourteen knowing subpar Hebrew and basic knowledge of the stories of the Tanach and halacha, all taught to him by his family. He began taking his spiritual heritage more seriously, walking 2.5 miles to shul every Shabbat and spending the extra money he made from his high school job purchasing seforim to fill his thirst for the knowledge of Hashem.

Now, he’s in college studying biomedical engineering. On top of being a full-time student, he also holds a full-time job, however, he does not use these as excuses to deviate or lessen his spiritual studies. He returns home every Shabbat to celebrate with his family and still walks 2.5 miles to shul. Through his studies he has reached the point where he is one of the chazzans, as well as the gabbai sheni. He has also delivered many drashot over the years that are aimed at inspiring others to walk in the ways of Hashem through the light of the Torah. He spends his free time during the Kiddush teaching the children Tanach, mussar, and basic halacha. Yosef isn’t one to brag about his accomplishments or become haughty from them. He only allowed me to publish this article because he hopes it will inspire others to strive to continuously increase in their knowledge of Hashem and to follow in his ways despite the difficulties in their lives.

On Yom Kippur, after the Kol Nidrei service, he confided in me that he had made a resolution to push himself out of his comfort zone. He decided he would complete an entire tractate of Talmud, Masechet Makkot. He doesn’t know the ancient Aramaic language so he used an ArtScroll Talmud with English translation. Although he has no time, he made time.

Last night, he celebrated his first siyum. One of the people he dedicated his siyum to was his  grandfather, Yaakov Tissera ben Miriam, z”l, who like Yosef was a lover of Torah and inspired many through his words. His family was in attendance including his grandmother, Esther Tissera bat Rachel who’s eyes twinkled like the stars in Joseph’s dream from the Kiddush Hashem her grandson was doing.

I had the honor to stand beside him as he reached this mountain-peak in his life. As I heard him reading the ancient words of the Torah, I thought of all the persecution & hate his ancestors had to endure just because of their fidelity to Torah. I thought of my love for Sephardim. And I thought of how proud those freshly-freed slaves would feel were they to look down from Heaven and see their great-grandson defying the Pharaoh’s of time to continue their story.

It is not by chance that the first siyum of Yosef’s life concluded with the following:

“[Once] it happened that Rabban Gamliel, Rabi Elazar ben Azaria, Rabi Joshua and Rabi Akiva went up to Jerusalem. When they reached Mt. Scopus, they tore their garments. When they reached the Temple Mount, they saw a fox emerging from the place of the Holy of Holies. The others started weeping; Rabbi Akiva laughed.

Said they to him: “Why are you laughing?”

Said he to them: “Why are you weeping?”

Said they to him: “A place [so holy] that it is said of it, ‘the stranger that approaches it shall die,’ and now foxes traverse it, and we shouldn’t weep?”

Said he to them: “That is why I laugh. For it is written, ‘I shall have bear witness for Me faithful witnesses – Uriah the Priest and Zechariah the son of Jeberechiah.’ Now what is the connection between Uriah and Zechariah? Uriah was [in the time of] the First Temple, and Zechariah was [in the time of] the Second Temple! But the Torah makes Zachariah’s prophecy dependent upon Uriah’s prophecy. With Uriah, it is written: ‘Therefore, because of you, Zion shall be plowed as a field; [Jerusalem shall become heaps, and the Temple Mount like the high places of a forest.]’ With Zachariah it is written, ‘Old men and women shall yet sit in the streets of Jerusalem.’