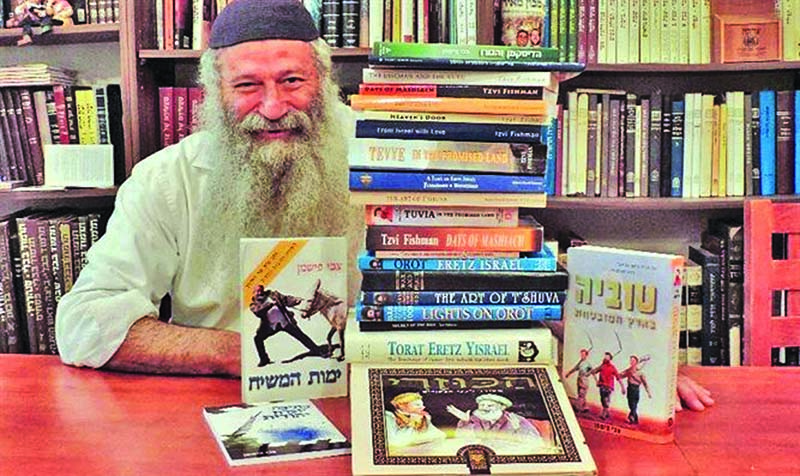 Once a Hollywood screenwriter, Tzvi Fishman today is the author of frum novels, the co-author of four commentaries on the works by Rav Avraham Yitzchak Kook, and the director of a film depicting Rav Nachman of Breslov’s tales.

The Jewish Press: Where did you grow up?


Fishman: In New England where my family belonged to a Reform temple. We lit Chanukah candles and had a Christmas tree, and while my parents fostered a pride in being Jewish, being an American came first.

To me, going to Hebrew school meant having to miss basketball practice and being different from my friends. The watered-down Judaism I experienced didn’t excite me at all, and I didn’t want to go through the motions of a bar mitzvah. But my parents insisted, so I had my bar mitzvah in a nearby Unitarian church since our temple was undergoing renovation at the time.

How did you wind up in Hollywood?

By the time I graduated NYU Film School, I had already sold my first screenplay and published a novel with Dell Publishing Company. I lived a hippie, bohemian life in Greenwich Village, going to Off-Broadway plays and reading Norman Mailer, Henry Miller, Philip Roth, and Hemingway in pursuit of my dream to become the next great American novelist. 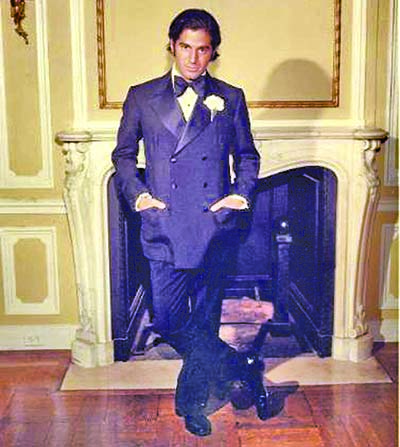 Later, I headed West where I sold two more original screenplays that were made into films. I had money, a cool apartment by the beach, a racy sports car – in short the American dream. In the morning, I used to work out in the weight room with Arnold Schwarzenegger, who was just starting his movie career.

What led you to become frum?

With each new conquest and success, I felt something was missing. Each new acquisition left me feeling empty.

And then, at one point, I became physically ill with a severe case of ulcerative colitis. I would have to race to the bathroom with a diarrhea attack 20 times a day, and only blood would pour out. It blew my mind completely. Here I was, rocketing up the ladder of success in Hollywood, and I had to spend half my day in the bathroom.

I took large doses of cortisone, which blew up my face like a beach ball, and then when the medicine failed to cure me after two years, I started out on a spiritual quest. I tried everything – health food, macrobiotics, holistic massage, yoga, I Ching, acupuncture, gestalt, Tarot cards, you name it.

Then one day, I was sitting on the beach when a friend from Israel asked me, “Why don’t you know anything about Judaism?” The question was like an atomic explosion. I had studied world history, literature, science, art, Christianity, Zen Buddhism, Hinduism, Aristotle, Plato, Kant, Voltaire, Nietzsche, and Thoreau. But I knew absolutely nothing about Judaism.

So you decided to look into it?

That very day I bought a Bible and started reading: “In the beginning, G-d created the heaven and the earth.” When I read those words, my gaze shot up to the sky. “Oh, no!” I thought. “G-d really exists, and I haven’t paid any attention to Him.”

When Rosh Hashanah arrived, I walked to Santa Monica Beach and threw my cortisone pills into the ocean, asking Hashem to heal me and forgive me for having ignored Him. And then one night, after days of profuse bleeding, I dreamed of a pair of gigantic tefillin and heard a bat kol from Heaven that called out clearly: “This is the solution – you have to attach yourself to Hashem!”

After that, I started to learn about the mitzvot. To make a long story short, the bleeding vanished without the cortisone. Miraculously. It was absolutely mind blowing. My doctors couldn’t explain it. And after such Divine Intervention, how could I go on living my less-than-holy Hollywood lifestyle?

How did you wind up in Israel?

I asked Hashem to give me a sign. “If You want me to go to Israel, I’ll go,” I promised one night before going to sleep. In the morning, as I left my apartment, I noticed a big brochure sticking out of my mailbox. On the cover was a picture of the Kotel with a caption in bold lettering: “Jerusalem, My Chosen City.”

I felt goosebumps all over my body. Never in my life had I received mail from a synagogue or Jewish organization! The same day I bought a plane ticket to Israel.

Recently, you have written several works of historical fiction that retell the history of Zionism through the fictional character of Tevye, famous from the movie, “Fiddler on the Roof.”  What led you to write these novels?

In college, I saw “Fiddler on the Roof,” and fell in love with Tevye and his down-to-earth Jewishness. When I finally moved to Israel, I felt forlorn that Tevye was still wandering in foreign gentile lands, so I decided to bring him to Israel and turn him into a pioneer settler.

In my novels, Tevye’s devotion to Hashem becomes complete. And by weaving his adventures in with the era’s towering lovers of Zion – like Yosef Trumpeldor, Ze’ev Jabotinsky, and Yair Stern, to name just a few – I am able to pack the novels with drama and suspense, allowing readers to learn about this inspiring segment of our history in an entertaining fashion.

What lessons would you like your readers to come away with from your novels?

Our Sages teach us that the Land of Israel is acquired through suffering and self-sacrifice. In our generation, the lures of materialism and comfort have caused a large part of the Jewish people to lose sight of our destiny and national mission.

In addition, through Teyve’s perspective, I am able to tell the story of Israel’s rebirth from a rightest point of view, redressing the fake history that the political left in Israel has been fostering since the state’s establishment.

A decade ago you wrote a very interesting article arguing that frum Jews should not read literature that contains immodest passages, and quote Rav Kook to make your point. First, what exactly did Rav Kook say?

In a letter to the newly-founded Bezalel Academy of the Arts in Jerusalem, Rabbi Kook praised the school for its important contribution to the nation’s revival. Nonetheless, Rabbi Kook warned that great care should be taken to keep art within the clearly-defined borders of Jewish law.

In Olat HaRiyah, Rav Kook plays off the Torah commandment of a soldier having to bury his waste with a spade and writes: “a spade has been provided for those hidden [passions of man] through which mankind is bettered, not by expressing them, but by burying them. The spade should be used to dig a hole and cover them up. And woe to the person who uses the tool to do the opposite.”

Aren’t you yourself possibly guilty of including some immodest passages in your novels?

In trying to capture the powerful personalities in the saga of our nation’s revival, I allowed myself a few romantic interludes, but every time a man attempts to take advantage of a woman, he is immediately dealt a blow of divine wrath.

You’ve been involved in efforts to encourage more responsible usage of the Internet in Israel.  What is the one thing you would advise parents on this subject?  To put filters on the computer?  Something else?

Certainly filters are a must, not only for the kids, but for adults as well. But today, young people are so computer-savvy that they can bypass almost every filter.

Concerned people, therefore, are now lobbying the Israeli government to design a national “Kippah Barzel” system against pornography on the Internet just like we have a national “Iron Shield” defense system against missiles. The liberal left, though, of course is protesting in the name of freedom of expression.

You have written extensively over the years on the importance of Jews moving to Eretz Yisrael.  Why is making aliyah so vital in your opinion?

Throughout Sefer Devarim and the writings of the nevi’im, we encounter the end-of-days scenario of the Jewish people returning to the Land of Israel and the nation being rebuilt. In our time, we have witnessed the Almighty bringing this prophecy about. In a matter of decades, Israel has become one of the most powerful nations in the world, as well as the Torah center of world Jewry.

With the frightening rate of assimilation in the Diaspora and the increase in anti-Semitism, it should be clear that our future lies in Israel.

What would you tell people who balk at the thought of aliyah because they don’t know the language and think they will be crushed by the aggressive Israeli culture?

First of all, as the offspring of Avraham Avinu, we all have the genes to meet the challenge. When Hashem appeared to Avraham, He didn’t tell him to keep kosher or put on tefillin; He told him to go the Land of Israel.

Everyone who has come on aliyah for the last hundred years has learned Hebrew, and the Jews from America can learn Hebrew as well. In my own aliyah experience, the Israelis have been very kind and supportive. I don’t think Israeli culture is any more aggressive than the dog-eat-dog world of America.

But if adults don’t feel they are capable of performing this mitzvah, they should at least tell young people to perform it.

You made a film a few years ago, bringing several of Rav Nachman of Breslov’s stories to the big screen.  Why?

I wanted to use the filmmaking and screenwriting skills I learned before I became frum to spread the light of Torah. I myself am not a Breslover, but I love Rav Nachman’s fable-like stories, which are filled with joy and faith. It’s a lovely movie, but with the modest budget we had, it’s not going to become a classic like “Fiddler on the Roof.”

What are you working on now?

Bezrat Hashem, I want to write another two novels in the “Tevye in the Promised Land” series, bringing the saga up to Israel’s War of Independence. 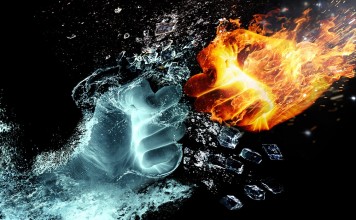 When Fire & Water Collide – The Science of Kabbalah [audio]