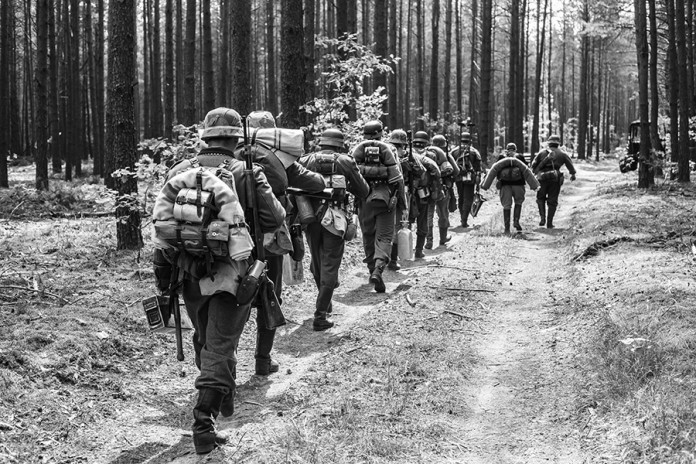 “Hear O Israel, you are coming near to the battle against your enemies….” (Devarim 20:3)

Rashi cites the Talmud (Sotah 42a), “Even if you have no other merit than the recitation of the Krias Shema you are worthy that Hashem should save you.”

R’ Yechezkel Levenstein observes that it is not the mere utterance of the Shema that is implied here. Rather, at times of war one must strengthen one’s emunah to acknowledge that it is Hashem who conducts the war, and the outcome is not contingent on his own strength and vitality.

It is noted (Shoftim 7) that when Gidon gathered 32,000 soldiers to wage war with Midyan, Hashem said to him, “The people that are with you are too numerous … lest they say, ‘My own strength has saved me!’” Gidon called out, “Whoever fears and trembles, let him turn back,” and 22,000 soldiers who were afraid that their aveiros made them unworthy returned home. The number was further diminished to only 300 men when they were tested to determine who was accustomed to kneeling before idols. Then Hashem said, “With the 300 men I will save you and I will give the Midianites into your hand.” Hashem wants us to have the clear recognition that although we must make our own efforts (hishtadlus), the ultimate salvation comes only from Hashem.

This is the mitzvah of (Devarim 18:13): “You shall be wholehearted with Hashem.” Only Hashem knows the future and only He knows what is necessary in order to effect a positive outcome. We have no one upon whom to rely other than our Father in Heaven.

The Yechi Reuven cites the Zohar, which explains that of the three prayers – tefillah l’Moshe, tefillah l’Dovid and tefillah l’ani (of Tehillim) – that the last, a prayer of the poor man, is the most meaningful, for it comes from a broken heart and a humble spirit. When Dovid HaMelech heard this, he took off his crown and royal garments and sat on the ground like a poor man, as it says (Tehillim 25:16), “… show me favor for I am alone and poor.” Hashem said to Dovid: “You are a king who rules over kings. How could you say you are ‘alone and poor’?” The Zohar concludes that Dovid accepted Hashem’s contention and conceded, as it says (Tehillim 86:2), “Guard my soul for I am devout.”

The Alshich comments on the verse in Tehillim (51:19), “The sacrifices G-d desires are a broken spirit, a heart broken and humbled.” He points out that G-d’s name here is Elokim, which represents the Attribute of strict justice. Yet, says the Alshich, the verse is telling us that when there is a broken heart, even the Attribute of strict justice acknowledges that the prayers should be accepted and those prayers are, in fact, not rejected.

The chapter of tefillah l’ani is recited during times of adversity and distress. There are often challenging times for the Jewish Nation, when we gather to recite the Tehillim, Avinu Malkeinu, Shema Koleinu. Nevertheless, it is when we stand daily before the King of kings reciting the prayer of Shemone Esrei that we must be vigilant to make the extra effort to pray with deep devotion and kavanah.

A Jew who was down on his luck and unsuccessful in earning a livelihood came to the Lelover Rebbe. He wanted to know whether he should, perhaps, consider traveling to America so that he could better support his wife and family.

The Lelover said he would tell him a story that would help him better understand what to do.

There was a destitute rav of a small city whose citizens were very poor and could not support their leader, a great talmid chacham.

One day, two wealthy people came into town and requested that the rav arbitrate a din Torah between them. Since they could not remain long, they wanted the rav to come to their city to listen to their arguments and presentation of the evidence. In return, the rav would be paid a large sum of money.

The Rav listened to their proposal, and then interrupted to say that he had to daven Mincha. He promised to talk to them when he had finished his prayers. Upon his return, the Rav informed the two claimants that he was not interested in traveling to their city, and the two individuals left the Rav’s study.

Upon their departure, the Rebbetzin began to cry. “What did you do?” she wailed. “You were offered an opportunity to make some money and you turned them down. Why did you go out to daven Mincha?”

The Rav explained that as he was davening Mincha he came to the words in Shemone Esrei, “Hashem, bless on our behalf this year … and satisfy us from Your bounty ….” He told the Rebbetzin, “I am asking Hashem to bless this year, and that bracha comes directly from the Heavenly Throne to my house, a distance of millions of years, as the Talmud tells us that the distance from the world to the first firmament is 500 years. If Hashem wants to send blessing from such a distant place, why would I have to travel to the city where the wealthy people live? Therefore, I chose not to travel. If Hashem wants to send us His blessing, He can send it directly to our address.”

Surprisingly, moments later the two rich men returned to the home of the Rav and said they had agreed to have the din Torah take place at the Rav’s home.

That was the answer that the Lelover Rebbe gave to the Jew who wanted to know whether he should go to America. “You should know,” said the Lelover, “that everything has already been decreed – the right time, the right season, and the right place. The only thing we need to do is to trust completely in Hashem, as it says (Tehillim 55:23), “Cast your burden upon Hashem and He will sustain you.”