The Obama administration is considering throwing away its “veto” card on anti-Israel resolutions in the United Nations to show Prime Minister Binyamin Netanyahu that he will pay a heavy price for not taking orders from Washington.

The Haaretz newspaper, which is Israel’s answer to The New York Times when it comes to cooperating with Obama, reported Thursday, “Senior Israeli officials said that White House officials held a classified discussion a few weeks ago about the possibility of taking active measures against the settlements.”


The newspaper added that American officials did not deny the report, which just as likely may have come from Washington as well as from Jerusalem.

The Obama administration clearly has thrown its hat in Israel’s elections. The day that Netanyahu announced he was firing Tzipi Livni and Yair Lapid and calling for new elections, John Kerry, the wannabee absentee prime minister of Israel, said “I simply don’t comment on the internal politics of any country,” and then he immediately contradicted himself and laced himself smack bad in the middle of the anti-Netanyahu camp, to wit:

“We hope that whatever government is formed, or whether there are elections, that those elections will produce the possibility of a government that can negotiate and move towards resolving the differences between Israelis and Palestinians, and obviously, the differences in the region.”

Now comes the American plot to show up Netanyahu in the campaign and “punish” him for rejecting the Obama’s demands to stop being so Zionist to think that Jews have a right to live in Jerusalem “settlements” that are claimed by the Palestinian Authority.

The White House went so far as to say earlier this year that Israel’s plans for building new homes for Jews in eastern Jerusalem “poison the atmosphere.”

Obama, whom American voters snubbed last month by voting for Republican Congress, needs someone on whom he can take out his anger, and Netanyahu now is a timely punching bag.

The Americans government, as well as American establishment media, depends on Haaretz as their source of information, regardless of most of being dis-information and sometimes plain illusions.

It actually believes that building homes for Jews is an obstacle to peace, which is true if one defines peace according to Mahmoud Abbas.

It believes that Israeli voters will vote for “anyone but Bibi” once they realize that “American’s unshakeable ally” might not support Israel in the United Nations or, as Haaretz wrote, “issue clearer instructions to American officials about the ban on cooperating with the settlements or funding activity in them.”

Even Haaretz admitted that if Obama tries too much to undermine Netanyahu, it could work as a boomerang and hit the president square between the eyes. 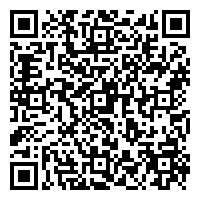