The new Housing Minister Yitzhak Goldknopf (UTJ) on Sunday sent a letter to two associates: National Security Minister Itamar Ben Gvir (Otzma Yehudit), and Science and Technology Minister Ofir Akunis (Likud) regarding what he considered a problematic address in use for the Israeli government campus.

Before I offer my translation of the letter, you need to know that Haredi politicians have been reluctant for years to serve in government as ministers, lest they be held responsible for anti-halachic acts of the government; and they’ve also been more than reluctant to embrace nationalist and Zionist values such as IDF victories and liberated territories.

Goldknopf, a Gur Hasid serving as UTJ Chairman on behalf of the Gerrer Rebbe, Rabbi Yaakov Aryeh Alter, is a trailblazer in this regard. He not only declared that he wanted the Finance Ministry––a portfolio no Haredi lawmaker has ever touched, he also demanded a seat at the table of the political-security cabinet––a demand he gave up only after heavy (even raging) resistance from his Lithuanian partner, MK Moshe Gafni.

Subject: Changing the official address of the government campus.

When I entered this morning at an opportune hour the Housing and Construction Ministry, I noticed that on the ministry’s official stationery appears the address: Government Campus East Jerusalem.

The national security and science and technology ministries reside at the same address.

United Jerusalem is one. It is not a trivial thing that official government stationery immortalizes the de facto division of the city. How can we complain about the other nations of the world who do not recognize our sovereignty over all of the holy city of Jerusalem, when an official paper of the Israeli government divides the city into east and west?

I request that you consent to join me in correcting this distortion, and determine that from now on, the official stationery and the website of the Menachem Begin Government Campus will bear the address: ‘Jerusalem.’

Folks, the redeemer is just around the corner, hectically adjusting his hat and tie. God bless you, Minister Goldknopf! 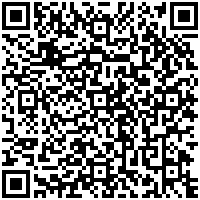