Speaking at a Likud faction gathering in the community, Netanyahu promised the city, located just a few minutes’ drive from the capital, “will always remain part of Israel.”

Netanyahu also pledged to build 1,200 new housing units in Ma’ale Adumim as part of that new measure, which he said would “intensify the momentum of development” in the city.

“We will build here thousands of [housing] units,” he told those at the meeting. “We are adding industrial zones and the required expansion to enable accelerated development of this place.

“This place will be part of the State of Israel,” he continued. “I support the Greater Jerusalem bill that will enable Jerusalem and its [surrounding] communities to develop in many different ways. This is very great and important news.”

The prime minister acknowledged there were yet some issues regarding “infrastructure, employment and security” to be addressed, but added, “We’ll take care of them.”

Although the surrounding communities are to be integrated into metro Jerusalem for annexation in a “Greater Jerusalem” capital area, however, according to Ynet, the various communities will not lose their individual political status. 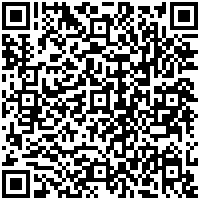