The US State Department appears to have removed the Palestinian Authority – and “Palestine” – from the list of “Countries & Areas” in the Middle East.

“It used to be Palestinian territories or the Palestinian Authority,” observed journalist Aaron Magid this weekend in a post on Twitter. “Now, Palestinians don’t exist.”

The listing disappeared from the State Department’s “Under Secretary for Political Affairs Bureau of Near Eastern Affairs,” which leads US foreign policy in the Middle East and North Africa region, according to its website.

Palestinian Authority leader Mahmoud Abbas has repeatedly insulted and scorned US President Donald Trump in his public addresses, both in English and in Arabic, in addition to constantly reiterating his refusal to engage with the Trump administration Middle East peace plan — sight unseen — regardless of what benefits it might have to offer his people.

Abbas and his ruling Fatah faction also last month vowed to disregard the Oslo Accords designations that separate three geographical areas in Judea and Samaria — Areas A, B and C — into areas administered wholly, partly and together between Israel and the Palestinian Authority. Instead, Abbas said his government would begin carrying out administrative activities in Area C — territory that is under complete Israeli administrative and security control under the internationally-recognized Oslo Accords — without regard to the fact that the Palestinian Authority has no authority there.

In fact, however, the Palestinian Authority has already been doing so with the active funding, encouragement and cooperation of the European Union.

The PA government been carrying out a campaign of occupation and seizure of land through agricultural planting, ongoing construction and infrastructure development by stealth — a strategy planned by PA Prime Minister Salam Fayyad and published in 2009 under the name, “Ending the Occupation, Establishing the State.”

This activity is being monitored by the Regavim NGO, which is raising the alarm publicly, and privately as well, in the Israeli courts as well as in other sectors. 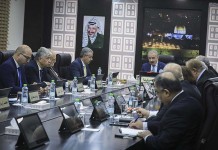 PA Shuts Down for a Month to Stop Coronavirus 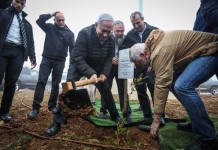 Netanyahu Vows Sovereignty Over Jordan Valley ‘Within Weeks’ If Reelected 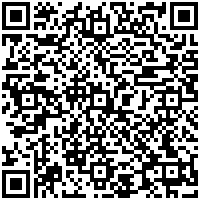