The attempt of the Jew to show his patriotism to the ruling gentile is an old phenomenon, with Jews like Josephus fighting for the very nation that destroyed his homeland, to modern times, where Jews were often found on both sides of the conflict, fighting for their respective “homelands.” Perhaps the most intriguing and absurd scenario, at least in retrospect, is the tens of thousands of German Jews who fought for their county and the many of whom gave their life for it. 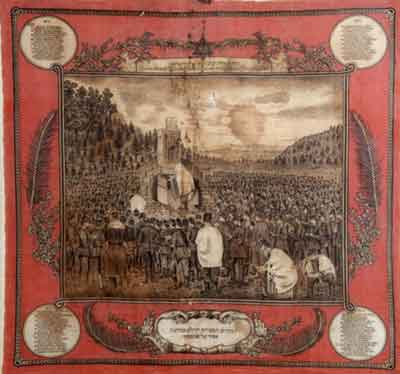 A beautiful black and red printing on cotton cloth, made for wall hanging, that I acquired this week tells of one such period, where the Jews volunteered and conscripted to the German forces in the Franco-Prussian War. The inscription on the illustration states: Yom Kippur services, 1871, in the camp overlooking Metz. The drawing commemorates the Yom Kippur service of Jewish soldiers in the German Army during the siege of the Fortress of Metz, 1870.


The picture shows a large field full of soldiers surrounding a makeshift Torah ark and bimah. The Siege of Metz was a battle fought during the Franco-Prussian War from August 19 to October 27, 1870 and ended in a decisive Allied German victory. The siege ended in a French surrender, and the entire army of the Rhine, some 193,000 men, surrendered into German hands.

In World War I, an estimated 100,000 German Jews served in the German Army of which over 12,000 were killed. Eighteen thousand German Jews received the Iron Cross during the war. The irony of the Jews dying fighting for Germany was confounded only a few years later, when Hitler used this fact as support for his myth that the Jews were in the army to secretly help the enemy, stabbing Germany in the back. Once in power, the Nazis attempted to eradicate all evidence of Jewish soldiers fighting for Germany in World War I.