When I attended the Israel Advocacy Seminar organized by David Bedein of Behind the News in Israel I was very impressed by the presentation by Sha’i Ben-Tekoa. He began it by asking the students in attendance if they had taken a course in “Palestinian History.” Obviously nobody had, because there is no history of such a people/nation. That is so unlike Jewish History which has been documents and recognized for thousands of years.

One can spend a lifetime learning Jewish History and never finish. I’ve been studying the Bible for years and can’t keep the names of all the kings in my head, certainly not the order in which they ruled here.  Yes, here, because early Jewish History began here. Actually the first signs that we were truly a Jewish Nation, not just a clan or tribal confederation was here in Shiloh where I live.


Shiloh was the first administrative and religious capital of the Jewish Nation, before we were ruled by kings.This status continued for almost four hundred years, thousands of years ago. And Jewish History continues  until this day.

Please don’t forget or ignore the fact that Jewish History continued even after we lost our independence and were exiled from our Land. There never was a time we didn’t pray for a return of Jewish sovereignty, and there was never a time when the Land was totally empty of Jews. Jews have always lived in the Holy Land regardless of the difficulties.

The idea of “Palestinians” is a totally modern invention and not even connected to self-determination. Easy proof of that is the name. It begins with the letter “p” which doesn’t at all exist in Arabic. There is no “p” sound for Arabic speakers, which is easy linguistic proof that non-Arabs invented the concept.

There’s very clever picture going the internet which shows a man holding the sign which says:

“We Would Boycott “Palestinian” Goods, But…They Don’t Actually Make Anything.”

Lihavdil, this brings me back to something totally brilliant I once heard from Nadia Matar on Arutz 7 radio. She was talking about the boycott of products by Jews of YESHA. She said that it made her joyful, because it was proof that our enemies recognized us to be productive. Jewish industries in YESHA show that our communities are permanent and industrious, not fly-by-night transients.

Nadia said this over a decade ago, and since then more Jews live in Judea-Samaria (YESHA,) and there is even more industry and business.  We have returned home and we’re staying! 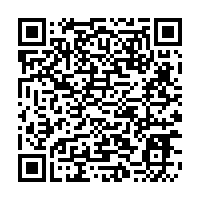