The Jerusalem flag march was what it was always intended to be—a celebration. The world held its breath as mostly high school students showed their love of Israel and commitment to an undivided Jerusalem.

With the benefit of hindsight, a number of important observations need to be made, both about the march itself and the reactions to it.

Perhaps its biggest accomplishment was to call Hamas’s bluff and to expose the lunacy of allowing it the opportunity to set the agenda and to call the shots, as it were.

It took Bnei Akiva, Ezra and other youth movements to say that regardless of whatever clothes the “Emperor Hamas” did or did not have, there is nothing that it could do or say that should in any way deter the assertion of love of country and ineffable tie to Jerusalem.

This is a lesson that must be learned and then applied and reapplied. The fear that a possible Hamas attack should have canceled the march is the first cousin of the “keep a lid on it” thinking and policy-making that have brought us to the brink of social disruption, if not civil war.

Threats of an attack are only made if one thinks that he will be taken seriously. A message to us all: Don’t be intimidated.

The other interesting accomplishment of the march was to expose the hysteria of a mostly left-wing media, which had already labeled the marchers as “far-right,” “ultra-right” and “uber-right-nationalist” (code for fascist). All 5,000-plus marchers, according to the press, were the useful idiots of Religious Zionist Party Knesset member Itamar Ben-Gvir, if not his henchmen.

In other words, media coverage was of a piece with the new world order, according to which “I don’t agree with you” has been replaced by “what’s wrong with you?”

There was scarcely any attempt to understand the need to hold the march. There was only the attempt to see it as a way to threaten the new government, to endanger the innocent, and, of course, to demonize Arabs.

In this regard, the media found their voice. They characterized the entire event as being in the image of a few screaming idiots who chanted “death to the Arabs.” Forget the fact that the organizers forbade banners, placards or political messaging.

“Death to the Arabs” was, of course, the real essence of the parade, according to the media. To paraphrase Mordechai’s famous statement to Esther: “Demonization of the Jews will come from somewhere.”

Most of the press was hell-bent on that goal and would find validation wherever it might appear.

But the depiction of the march was the opposite. The subject was the chanting, whereas the aftermath—the “oh, by the way”—was the fact that it went off without a hitch. One sensed the great media disappointment with the reality that march was just a parade—not a riot, not a confrontation, and overwhelmingly an expression of love.

Which brings us to the hero of the event, the people of Israel: the citizens who insisted that it was their right (remember the “sacred right to demonstrate” that answered every complaint of 2 a.m. noise pollution accompanying protests against now-former Prime Minister Benjamin Netanyahu?) to march and to express their devotion to Israel and Jerusalem.

Participants were struck not just by the overwhelming preponderance of youth, but also of the many families with little children who marched. These marchers were the antidote to fear, to cynicism and to the effort to demonize them as being murderous zealots.

I have a suggestion to all those who were hiding under their desks, or willing to accede to Hamas’s demands, or who were mystified as to why the police and the government would allow such a brazen display: Count your blessings that the people of Israel are as strong and attached to the land of Israel, the State of Israel and Jerusalem as they are.

It is our youth, our young families, who are showing the rest of us the way. They are our future, and we should be grateful to them for their conviction and commitment.

Let the spirit of the march—the real spirit, embodied in the mostly peaceful, loving participants—teach us to stand up straight, without fear or apology. 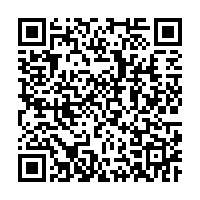